Low-intensity explosion near Israel Embassy in Delhi, all airports on high alert 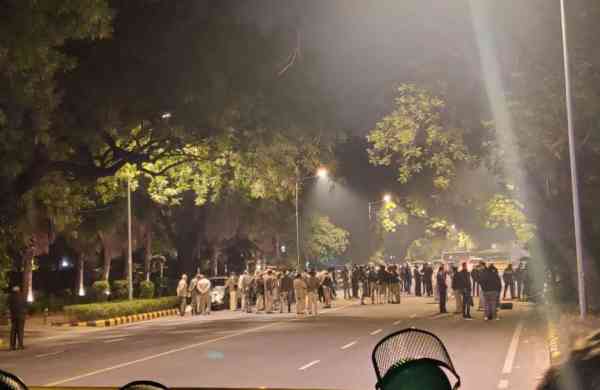 By Agencies
NEW DELHI: A low-intensity explosion occurred near the Israel Embassy in the national capital on Friday.

Delhi Police said that the explosion took place at the roadside of 5 Aurangzeb Road in the heart of the city. Fire brigade, SWAT and forensic teams rushed to the spot soon after the incident that took place at around 5 pm.

#WATCH | Delhi Police team near the Israel Embassy where a low-intensity explosion happened.Nature of explosion being ascertained. Some broken glasses at the spot. No injuries reported; further investigation underway pic.twitter.com/RphSggzeOa
— ANI (@ANI) January 29, 2021

According to sources, “the improvised device was found in a flower pot on road divider near Jindal House, Delhi. It appears that it was thrown from a moving vehicle”.

As per fire department information, they received the call at 5.11 pm, and three fire tenders were pressed into service. The windowpanes of a vehicle parked nearby were damaged. Meanwhile, an alert has been issued at all airports across the country, important installations and government buildings in view of blast reported.

Spoke just now to Israeli FM @Gabi_Ashkenazi about the explosion outside the Israeli Embassy. We take this very seriously. Assured him of the fullest protection for the Embassy and Israeli diplomats. Matter is under investigation and no effort will be spared to find the culprits.
— Dr. S. Jaishankar (@DrSJaishankar) January 29, 2021

The Israel Ministry of Foreign Affairs said, “An explosion recently occurred near the Israeli embassy in India. There were no casualties in the blast and no damage to the building. The incident is under investigation by the authorities in India who are in contact with the relevant Israeli authorities. The Foreign Minister is regularly updated on the incident and instructed to take all necessary security measures”.

Reacting to the blast, Delhi Chief Minister Arvind Kejriwal said any attempt to disturb peace should be firmly dealt with.

Concerned by the news of a blast near Israeli Embassy in Delhi. Agencies are determining the nature and cause of the blast. Thankfully, no loss of life reported yet. Any attempt to disturb the peace of Delhi shud be firmly dealt with
— Arvind Kejriwal (@ArvindKejriwal) January 29, 2021

“The nature and cause of the blast near Israel Embassy is being determined,” he said in a Tweet.

There is a heavy deployment of police personnel and APJ Abdul Kalam Road road has been cordoned off.

Officials said that they are scanning footage of CCTV cameras installed nearby to ascertain the sequence of events.

Senior officers of the Delhi Police are on the spot.

After the blast, the Central Industrial Security Force (CISF) which guards vital installations in the nuclear and aerospace domain, civil airports and central government buildings in the national capital has put on alert all its units across the country, official sources said.

It has asked its personnel to enhance vigil and maintain a “high level of alert”, they said.