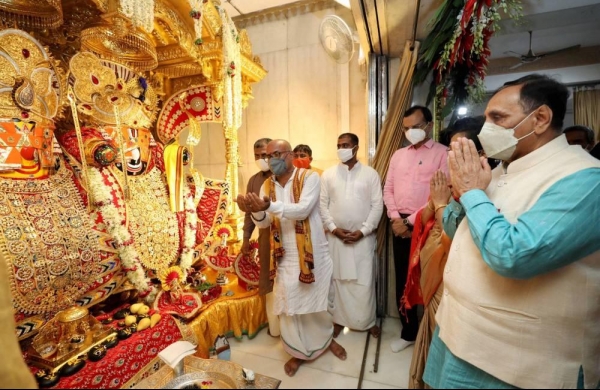 By PTI
AHMEDABAD: The annual rath yatra of Lord Jagannath in Ahmedabad city, which generally attracts massive crowd, will be taken out amid a curfew on its route on Monday to bar people from taking part in it in view of the coronavirus pandemic, officials said.

Apart from no public participation, the 144th rath yatra would be a shorter affair in terms of duration as the authorities plan to conclude it within four to five hours as against the usual time of around 12 hours, although the procession would cover the entire 19-km route as earlier, they said.

The state administration and temple authorities have made all the arrangements for the rath yatra without public participation and any fanfare.

Tight security arrangements have been put in place so that the yatra passes off peacefully with strict adherence to COVID-19 protocols and guidelines, officials said.

In view of the pandemic, the state government has made it clear that except for three chariots and two other vehicles, no other vehicle, singing troupes, akhadas, elephants or decorated trucks will be allowed to take part in the procession.

To stop people from gathering along the route for a glimpse of the deity, a curfew will be imposed on the entire yatra route from early morning till afternoon, they said.

Traditionally, the procession, led by chariots, starts around 7 am from the 400-year-old temple and returns by 8 pm.

Before the COVID-19 outbreak last year, lakhs of people used to gather along the route on ‘Ashadhi Beej’ every year to catch a glimpse of the decorated elephants and tableaux moving around in some 100 trucks.

The procession used to come back to the Lord Jagannath temple after covering a distance of 19 km in about 12 hours, which included an hour-long lunch break at Saraspur.

This time, the authorities have planned to complete the yatra in four to five hours.

There will not be any large gathering in Saraspur for the lunch break.

Since people from other districts and those living in western parts of the city also flock the route to watch the procession, police will regulate the traffic movement on all bridges to stop people from reaching near the route.

The government has appealed to the people to watch the yatra which will be telecast live on television channels.

As per the tradition, youths from the Khalasi community pull the chariots.

This time, only 60 youths, 20 for each of the three chariots, have been given permission to pull the chariots on the route.

Effectively, no one except those 60 youths along with some priests on each chariot, chief priest Mahant Dilipdasjee and trustees of the temple will take part in this year’s rath yatra.

Union Home Minister Amit Shah would perform the ‘mangla aarti’ at the temple on July 12 morning before the idols of deities are taken out for the yatra.

The CM visited the temple on Sunday evening to take part in evening aarti of the temple.

Heavy security deployment has been put in place on the entire route.

City police commissioner has also banned flying of any drones for a day in Ahmedabad on Monday.

Last year, only a symbolic rath yatra was organised in the premises of the Lord Jagannath temple in Jamalpur area here after the Gujarat High Court denied permission for the usual public procession due to the pandemic.