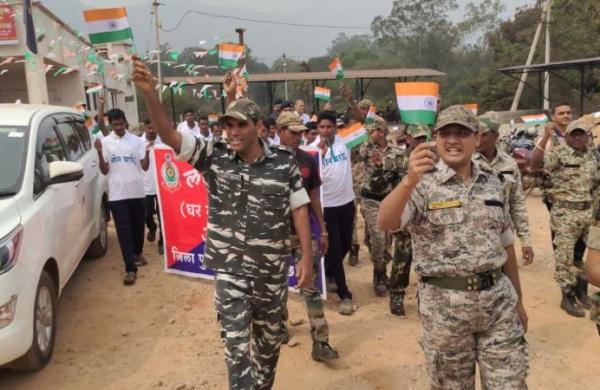 Some six months ago following the launch of counter-propaganda psy-ops ‘Lon Varratu’ (return to your home/village), the Dantewada police identified eleven cadres of the outlawed CPI (Maoist) in the village and publicly revealed their name.  In a rare occasion for one of the worst Maoist-affected district, all the recognised cadres inhabiting a village had unanimously decided to lay down their arms before the police.

The Dantewada police through its initial research works had prepared the profile of all Maoist leaders and cadres in the district based on the interrogation reports of the earlier surrendered rebels and the available records accessed from various agencies and sources.

“We have pasted the pamphlet of all 11 identified rebels who are native of Madkamiras village, about six months ago and all of them have surrendered. In our strive to convince the Maoist cadres that violence doesn’t have a future, the local villagers too are offering encouraging support to our mission”, said Abhishek Pallava, the district police chief.

So far 288 Maoist cadres have surrendered ever since ‘Lon Varratu’ was initiated in early July last year.

“In spite of various challenges of Covid-19 pandemic and lockdown, the security forces could make decisive inroads into some of the erstwhile epicentres of Maoists”, said Sunderraj P, Inspector General of Police (Bastar Range).

Following the surrender, the cadres stated that they realised their indiscriminate following of “hollow, anti-development ideology” of the left-wing extremist organisation. Dantewada is among the seven Maoist-affected districts in the conflict zone of Bastar, south Chhattisgarh.