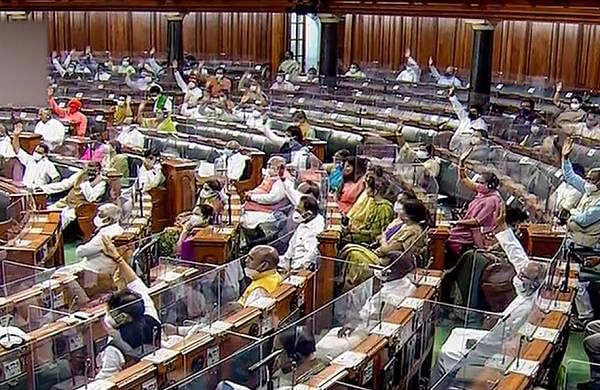 NEW DELHI: Lok Sabha proceedings were adjourned for the second time on Thursday as the Opposition continued with their protests against alleged snooping by Pegasus spyware and other issues.

The House was adjourned till 2 pm and prior to that, proceedings were adjourned for around half-an-hour till noon.

As soon as the House met for the day, Speaker Om Birla congratulated the Indian hockey team for an Olympic medal after 41 years as well as women athletes who won medals at the ongoing Tokyo Olympics.

When the Question Hour commenced, Opposition parties started protesting against various issues, including the Pegasus spyware controversy and farm laws.

Many members trooped into the Well of the House, shouting slogans and displaying placards.

Despite the din, at least ten questions and supplementaries were taken up during the Question Hour.

While urging the protesting members to go back to their seats, Birla said important issues are being discussed in the Question Hour and that they were not asking questions but only indulging in sloganeering.

“This is not appropriate for Parliament traditions,” the Speaker said and stressed that people want the House to run in accordance with traditions and rules.

Crores of rupees are being spent and people are asking why the House is not running, Birla said before adjourning the proceedings till noon as the Opposition uproar over various issues continued.

Earlier, Congress leader Adhir Ranjan Chowdhury sought to raise the issue of the death of a Dalit girl following an alleged sexual assault in the national capital but was not allowed.

As soon as the House resumed at noon, Chowdhury again tried to raise the issue of the death of the Dalit girl in Delhi.

He said he wanted the House to adopt a resolution condemning the incident.

The Congress leader of Lok Sabha was immediately countered by Minister of State for Parliamentary Affairs Arjun Meghwal who asked why the opposition party was silent on similar issues which had taken place in Rajasthan, a state ruled by the Congress.

Meghwal objected to Chowdhury raising the issue and said that it was condemnable that Congress leader Rahul Gandhi has failed to raise the Rajasthan issues.

Rajendra Agrawal, who was in the chair, ignored Chowdhury’s appeal and allowed the papers related to various ministries to be laid in the House amidst the continued protests and sloganeering by opposition members.

After about 10 minutes of business, Agrawal asked the protesting opposition MPs to go to their seats so that the House can function normally.

As the opposition did not heed to the chair’s appeal, Agrawal adjourned the House till 2 pm.

Since the start of the Monsoon session on July 19, Parliamentary proceedings have been continuously witnessing disruptions due to protests by Opposition parties.

Making a mention of India’s performance at the Tokyo Olympics, the Speaker earlier said the Indian men’s hockey team winning bronze medal was a unique achievement.

He also congratulated the country’s women athletes on winning three medals at the Tokyo Olympics and also termed their victories as the symbol of “Nari Shakti” (women power).

So far, India has won four medals at the Tokyo Olympics, including bronze by the men’s hockey team.

The three other medals have been won by woman athletes.

Mirabai Chanu has won silver in weightlifting in the 49 kg category, boxer Lovlina Borgohain (69kg) has bagged a bronze and shuttler P V Sindhu has won bronze medal in the women’s singles badminton