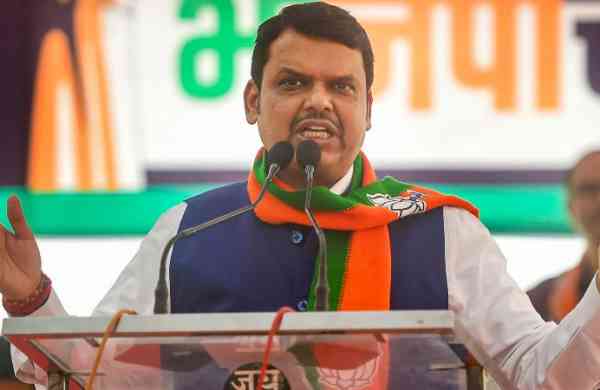 By PTI
PUNE: Stating that people lose their jobs when a lockdown is imposed, senior BJP leader Devendra Fadnavis on Monday alleged the Maha Vikas Aghadi (MVA) government is not serious about providing any financial aid to the vulnerable sections.

Taking a dig at the state government amid talks that an extended lockdown is imminent in Maharashtra in view of a steep rise in COVID-19 cases, Fadnavis said there is a “lockshahi” in the state now instead of ‘lokshahi’ (democracy).

The Leader of Opposition in the Legislative Assembly was addressing a rally for the upcoming bypoll to Pandharpur-Mangalvedha Assembly constituency in Solapur district.

The BJP has fielded Samadhan Autade against Bhagirath Bhalke, son of late MLA Bharat Bhalke, of the Nationalist Congress Party (NCP) for the April 17 contest.

“When this government came into power, it was called as Maha Vikas Aghadi but now it has become a ‘Maha Vasooli (extortion) Aghadi’.

The way they have started the vasooli from police, farmers and the common man, it shows that all the three ruling parties (Shiv Sena, NCP and Congress) have only one agenda and that is to collect money from wherever itis possible,” he alleged.

Fadnavis was referring to the allegations of corruption raised by former Mumbai police chief Param Bir Singh against then home minister Anil Deshmukh, an NCP stalwart.

The former chief minister also said the highest number of COVID-19 cases and fatalities are being reported from Maharashtra.

“In the last ten days, 50 to 55 per cent of the total deaths in the country were reported from Maharashtra.

Similarly, 60 per cent of the total cases in the country were also reported from Maharashtra,” he said.

Fadnavis said, “I can understand locking and unlocking (to contain the spread of coronavirus) is important but when a lockdown is imposed, people lose their jobs.

Unfortunately, the state government is not at all conscious about providing financial help to the (vulnerable) people”.

He said governments in Chattisgarh, Madhya Pradesh and Karnataka have helped the common man and farmers.

“It is the responsibility of the state government to help the people in distress but this (MVA) government, instead of helping people, is recovering power bills from them like the ‘Jizya’ tax that used to be imposed in the Mughals era,” Fadnavis said.

He said the state government has stopped disconnecting power connections of people (who have failed to clear their dues) due to this byelection.

“But you will see that the government will resume snapping power connections after the bypoll is conducted on April 17,” he claimed.

Fadnavis said West Bengal chief minister Mamata Banerjee, the communists and the Congress will receive a big jolt on May 2 when results of the assembly polls held in five states will be out.

Speaking at another campaign rally, Fadanvis said, “People may think what difference a bypoll will make to change the state government. Leave it to me when to change this government. We will change that, but for now, this bypoll is important as the people of this constituency have got the opportunity to show the government its place”.