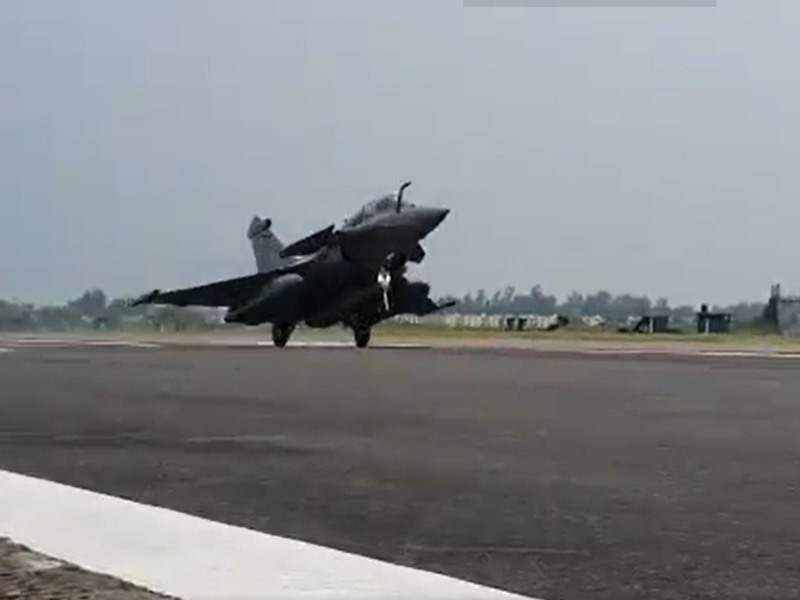 Rafale Fighter Jet in India: The clock that the whole country had been waiting for the last two days has now arrived. Of the 36 state-of-the-art Rafale aircraft being purchased from France, Rafale has finally landed at Ambala airbase at 3.20 pm today after a long wait. The country’s defense minister Rajnath Singh has confirmed the landing of the fighter jets. He has also shared a video of Rafael’s touchdown.

Congratulating Rafael’s arrival, he wrote that this is the beginning of a new era in the military history of India.

Tight security arrangements were made at the airbase before the arrival of Rafale planes and the 3 km radius was declared a no drone zone. Also this place was also declared as No Photography Zone. The security arrangements were tightened even before Rafale arrived at the Ambala airbase. Officers kept busy all day in the hangars and shelters in which Rafael will be erected.

These aircraft flew from the Marignac airbase of France on Monday. According to photographs released on Tuesday by the Indian embassy in France, the French tanker aircraft also fueled these aircraft at an altitude of about 30,000 feet.

The Indian Air Force tweeted, “The Indian Air Force appreciates the help given by the French Air Force in the journey of our Rafale aircraft.” The five Rafale aircraft landed at the Al Dhafra airbase of the United Arab Emirates (UAE) on Monday evening, after more than seven hours of flying, officials said. This is the only stopover of these aircraft in a flight from France to India. From here, these aircraft will fly to Ambala on Wednesday morning. If the weather is bad then these planes will be landed at Jodhpur airbase.

The seven Air Force pilots carrying the planes are led by Group Captain Harkirat Singh. All these pilots will follow the Kovid-19 protocol before beginning their operational flying.

Of these five Rafale aircraft, three are one-seater and two aircraft are two-seater. These aircraft will be included in the 17th Squadron, also known as the “Golden Arrows”. The formal induction of these aircraft into the Air Force is likely to take place in mid-August.

It may be noted that the first Rafale aircraft was assigned to the Indian Air Force in October last year when Defense Minister Rajnath Singh visited France. The arrival of these aircraft will significantly increase the combat capability of the Indian Air Force at a time when tensions between India and China are continuing along the border in East Ladakh.

It is known that India had signed a deal with French aerospace company Dasou on 23 September 2016 to buy 36 Rafale aircraft for 59,000 crores. Of these, 30 will be one-seater and six will be two-seater. Two-seater aircraft are training aircraft, but will have all the features of combat aircraft. Rafale’s first squadron will be stationed at Ambala, the second at the Hasimara airbase in Bengal.