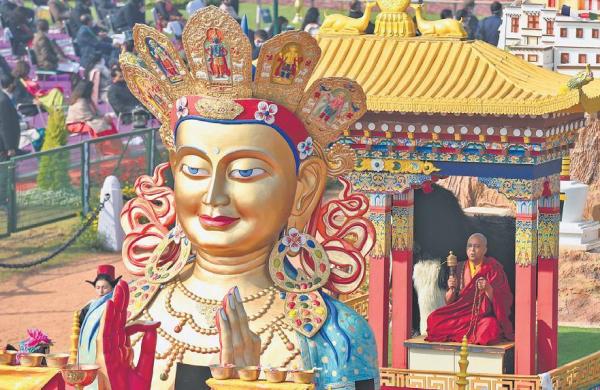 By Express News Service
NEW DELHI:  Limited spectators, shortened hours of performance wearing masks, parade ending at the national stadium instead of marching to Red Fort, yet India’s 72nd Republic Day celebration will be remembered for many of the firsts it showcased.

Blessed with a sunny day, the parade on Tuesday saw around 25,000 visitors. This year’s Parade Commander was Lieutenant General Vijay Kumar Mishra followed by Second-in-Command Major General Alok Kacker.  A total of 32 tableaus — 17 from states and UTs, six from the Defence Ministry and nine others — were on display.

Flight Lieutenant Bhawana Kanth, the firstwoman fighter pilot to take part in anR-Day event, on the IAF tableau;The Republic Day parade began with a 122-member contingent of the Bangladeshi armed forces marching for the first time on Rajpath. Like every year, this year too it was a power-pack show by the nation’s armed forces who took over the Rajpath with the BrahMos missile, third-generation Russian T-90 battle tank, the T-72 bridge-layer tank, the BMP-2 armoured personnel carrier, the Pinaka multi-barrel rocket launcher and others.

It was also a remarkable moment when Flight Lieutenant Bhawana Kanth — the first Indian woman to qualify for a combat mission in a fighter jet — became the first to participate in the flypast, creating a history. A total of 38 Air Force and four Army aircraft took part in the flypast. Amongst the tableau, it was for the first time that the Union Territory of Ladakh got to be displayed in the parade.  The tableau highlighted the ‘Vision’ for Ladakh to be carbon neutral and exemplary for the world.

Uttar Pradesh’s tableau displayed the state’s cultural city of Ayodhya and the Ram temple, which is under construction, was another major attraction this year. The touch of pandemic was seen in the parade with the theme of Aatma-Nirbhar Bharat Abhiyan: COVID  — the tableau by the Department of Biotechnology depicting the process of COVID19 Vaccine development through various processes.