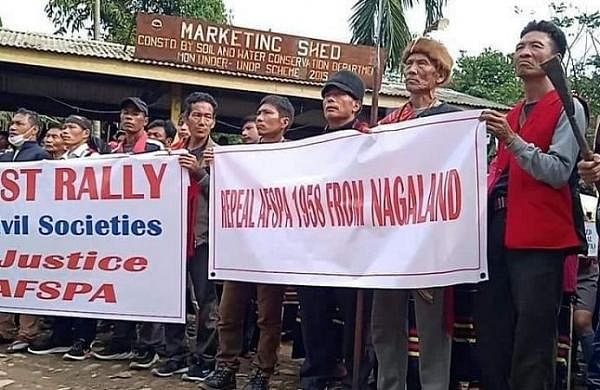 GUWAHATI: Assam Chief Minister Himanta Biswa Sarma on Saturday said there would be some positive developments on the demand for the withdrawal of Armed Forces (Special Forces) Act (AFSPA) from Nagaland in the next 45 days.

“The Centre has already constituted a committee. We are going to see certain positive developments in the next 45 days,” Sarma told journalists in Guwahati.

“The approach of Prime Minister Narendra Modi and Home Minister Amit Shah is very positive. The formation of the committee with a clear deadline of 45 days regarding partial or full withdrawal of AFSPA from Nagaland is a very important step,” the Assam CM, who is privy to the developments, said.

He was optimistic the initiative would help build confidence and that would, in turn, help address other issues.

His statements come amidst the fraying of tempers among various tribal organisations in Nagaland after the imposition of AFSPA in the state was extended by six months from December 30.

The organisations viewed the Centre’s decision as “another attempt to rub salt to the wounds caused by the botched Army operation at Oting in Mon on December 4”.

Talking about AFSPA in Assam, Sarma disclosed that the state would finally see some rationalisation during the year.

“The Army has been virtually withdrawn from Assam except in five to six districts. The Assam government will take some pragmatic decisions in consultations with the state’s Home department when AFSPA comes for review (ahead of extension of Disturbed Area status),” Sarma said.

On the insurgency situation in the state, he said tribal insurgency had come to an end. He credited the various civil societies with the return of peace to the state.

“The restoration of peace in Assam is the result of the hard work of civil societies. The tribals are determined to not allow anyone to indulge in militancy. When the civil societies are so firmly with you, I don’t see the eruption of tribal insurgency unless we do some gross injustice to the tribals,” Sarma said.

He said the stumbling block in bringing the Paresh Baruah faction of United Liberation Front of Assam or ULFA to the talks table was the rebel group’s Assam sovereignty demand.

“But given my personal interactions with people who are directly or indirectly in touch with Paresh Baruah, it is clear that he also wants a negotiated settlement like state and central governments. We are working towards creating a new position where both parties feel it is not very difficult to talk,” Sarma said.

On the interstate boundary disputes, he said the spirit of Northeast gets finished when the states fight among themselves. He was confident the disputes could be partially resolved within this year.