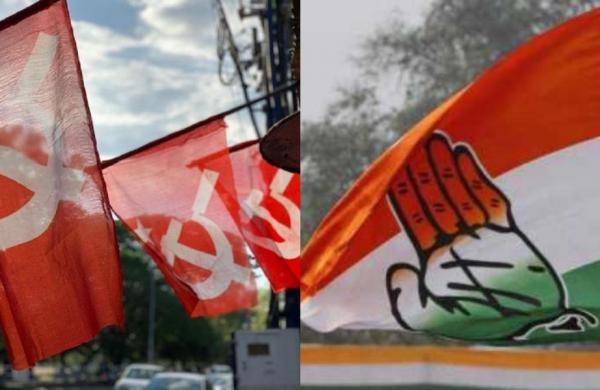 By PTI
KOLKATA: The Left-Congress-ISF alliance will kick-off its campaign for the upcoming assembly elections in West Bengal with a mega rally at the Brigade Parade Grounds in Kolkata on Sunday.

The CPI(M)-led Left Front and the Congress have already sealed a seat-sharing agreement, while the talks between the Left and Pirzada Abbas Siddiqui’s ISF have also concluded with both agreeing on 30 seats for the newly- floated outfit.

The negotiations between Congress and the Indian Secular Front (ISF) are at present underway, and both sides are hopeful that the differences over a few seats would be resolved, sources said.

“The mega rally at Brigade will mark the beginning of our campaign for the assembly elections.

We want to provide an alternative to the anti-people and communal politics of the TMC and the BJP,” senior Congress leader Pradip Bhattacharya said.

“A section of the press, and the TMC and the BJP are trying to project it as a two-cornered contest, but it will be a three-way fight in Bengal,” he added.

Chattisgarh Chief Minister Bhupesh Baghel will also be present, besides state leaders of the Congress and the Left parties.

The state Congress and the Left wanted Rahul Gandhi or Priyanka Gandhi Vadra to address the rally, which would have given a major boost to the alliance’s campaign, but both refrained from it, considering the compulsions of the Kerala elections where the Congress-led UDF is in a direct contest against the LDF, sources said.

The CPI(M) has gone all out to campaign for the rally — branded as ‘People’s Brigade’, launching innovative ways, from on social media to the streets.

The party’s youth activists have been hosting flash mobs over the past few weeks at several locations across Kolkata, including shopping malls, busy traffic intersections and crowded localities.

A parody of hit Bengali number ‘Tumpa Sona’ on social media, asking people to attend the Brigade rally has also created a wave.

“At the Brigade rally, we will speak about alternative policies.

We are fighting against both the TMC and the BJP, which are communal forces,” senior CPI(M) leader Md Salim said.

The Left-Congress, the vote share of which has been on a decline in West Bengal with the rise of the BJP, received a shot in the arm with Siddiqui joining the alliance ahead of the West Bengal polls, which is being seen mostly as a bipolar contest between the Trinamool Congress and BJP.

Siddiqui, a pirzada at one of the holiest shrines among Bengali Muslims — Furfura Sharif in Hooghly, launched the ISF last month.

He created a flutter by meeting AIMIM chief Asaduddin Owaisi ahead of the elections but ditched him for the Left-Congress.

West Bengal has 30 per cent Muslim population — a deciding factor in around 100-110 seats.

In case of a close contest, the Left-Congress-ISF alliance will become a deciding factor.

In 2016, the Congress and Left Front had fought together and bagged 77 seats in the 294-member assembly.

The alliance broke after the CPI(M)-led Left Front walked away.

During the 2019 Lok Sabha polls, the proposed Congress-Left alliance fell apart after the parties could not agree on seat sharing.

After the dismal performance of the two sides in the Lok Sabha polls, the Left-Congress decided to stitch an alliance to fight the 2021 assembly polls.

The details of the alliance’s seat-sharing will be announced once the ISF-Congress talks conclude, sources said.

Elections for the West Bengal assembly will be held in eight phases, up from seven last time, beginning with polling for 30 seats on March 27.