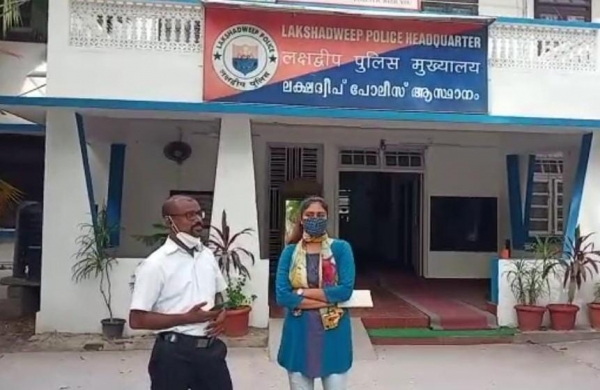 By Express News Service
KOCHI: The Lakshadweep police grilled activist-filmmaker Aisha Sultana for eight hours in connection with the sedition case on Wednesday.

Aisha, who arrived at Kavaratti police station at 10.00 am, was taken to Kavaratti government hospital for an antigen test after which the interrogation started. She was released at 6.30 pm and was told to stay back on the island for further questioning. The police did not record her arrest but informed her that she will be summoned for further interrogation after analysing the information shared by her.

According to sources, the interrogation was focused more on her links and financial dealings. The police quizzed her about her bank details, her travels and links with activists inside the country and abroad.

The police informed her that she will have to face action for the alleged violation of 7-day quarantinerules. The district collector had issued a caution notice warning of stringent action for violation of quarantine rules on Tuesday. The administration alleged that she had visited the first-line treatment centre and interacted with Covid patients on June 21.

The police had interrogated Aisha on June 20 in connection with the use of the term ‘bio-weapon’ while speaking about the easing of Covid restrictions in the island during a media discussion on June 7. Aisha had given a written statement to the police that she was referring to the reforms introduced by administrator Praful Khoda Patel and her reference was not against the Union government.

“Aisha looked very tired after the interrogation and she left for the quarantine facility immediately after release,” said district panchayat member Thaha Malika.