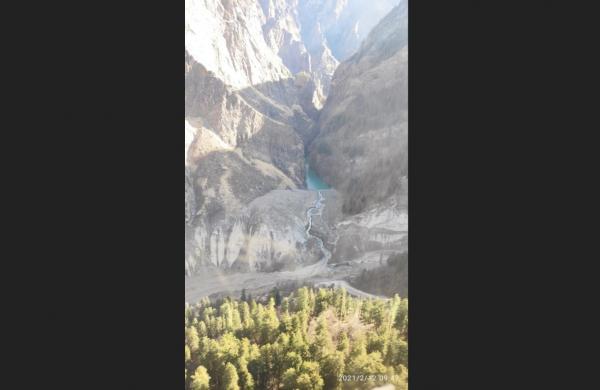 Express News Service
TAPOVAN: A lake that was formed in the absence of flow in the Rishi Ganga river now poses a greater risk of disaster, if it bursts, than that of the Sunday flashfloods, rue experts.

However, the scientists familiar with the landscape said that the water from the lake started draining on Friday which minimizes the chances of bursting of the water body.

YP Sundariyal, head of the department of geology department of Hemvanti Nandan Bahuguna Garhwal University said, “The lake is around 250-300 meters long, 80-100 meters wide and of about 25-30 meters height. The lake has a big volume of water and hypothetically speaking if it bursts, it can cause more damage than earlier. Big relief is that the water is slowly draining from the lake so it will not burst. The authorities should try to drain the lake without trying to burst it using experts.”

Sundariyal, a geologist by profession told The New Indian Express that a similar kind of lake but of a bigger size was formed in 1998 in Madkakini river in Madmeshwar valley which had drained without causing any damage.

“There was panic but the lake drained and the danger was averted. We hope same thing will happen to this lake too as it is already draining,” added.

Uttarakhand Chief Minister Trivendra Singh Rawat confirming the lake formation said, “We know about the lake and we are keeping an eye on it through our satellites. We need not panic but stay alert. Our team of scientists have been dispatched for the lake. We are trying to get them to the spot of the lake formation to assess the ground situation.”

A team of Indo-Tibetan Border Police, scientists from DRDO, Uttarakhand Space Application Centre (USAC) conducted and aerial survey of the lake but were not able to reach the lake through ground.

D P Dobhal, glaciologist who worked at Dehradun’s Wadia Institute of Himalayan Geology said, “I saw the pictures. The lake formation is dangerous but now that the water is draining slowly the threat has minimized but not diminished.

The rubble is huge and holding the water while drainage is on but if the lose material is pushed away by water it will be a big threat.”

Commenting if the forecast of rainfall up to 1 cm and snowfall up to 10 cm over the northern parts of the disaster-hit Uttarakhand early next week by India Meteorological Department (IMD) will be a factor in amplifying the tgreat, Dobhal said, “The threat will depend on the magnitude of snowfall and if its 10cm then it will add in 1cm of water which won’t be much threat but again we need to stay alert as situation is developing and volatile.”

Incidentally, on Thursday a video featuring a geologist from the same varsity surfaced claiming lake formation in higher reaches in Rishi Ganga river.

Geologist Naresh Rana of the the Hemvanti Nandan Bahuguna Garhwal University, Srinagar, in the video, explained that “the flood created a temporary damming which blocked Rishi Ganga from forming the lake.”

A slight breach to this temporary situation can unleash havoc to those downstream, he added.

“This can hamper the rescue efforts and it can hurt people who are involved in rescue operations. I am going to inform the administration so that they can conduct and aerial survey so that the correct size of the lake is determined,” said Rana.

Geologist Naresh Rana of the the Hemvanti Nandan Bahuguna Garhwal University, who released a video from the vicinity of the lake said, “What I understood from a bit of distance that the water has been accumulating for some days now. There are chances that the water will be drained with time but still it poses grave threat. There will be more clarity only after ground assessment which is being done.”