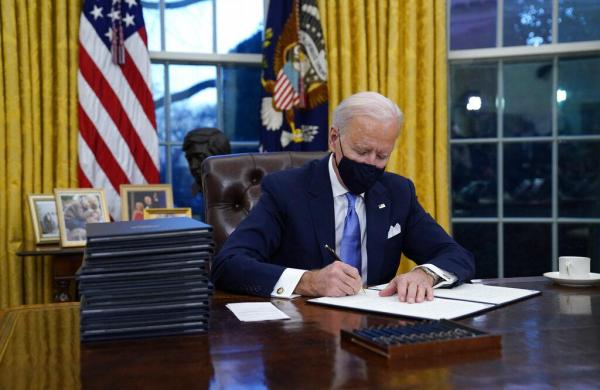 According to Variety, Lady Gaga appeared to sing the national anthem in a tight black long-sleeved shirt with a golden dove on it, and a billowing bright red dress.

Gaga sang the US national anthem with proper, Streisand-esque pronunciation in the golden microphone.

Besides her melodious voice, her gestures also expressed pride as she raised her left fist on the word “proudly” and continued gesturing with her right hand throughout the song.

Like most of her other performances, Lady Gaga was seen gently sobbing after finishing the national anthem with grace.

The ‘A Star Is Born’ musician had taken to Twitter ahead of her performance to expressing that singing the “National Anthem for the American People,” is her honour.

“Singing our National Anthem for the American People is my honor. I will sing during a ceremony, a transition, a moment of change–between POTUS 45 and 46. For me, this has great meaning,” she tweeted.

“My intention is to acknowledge our past, be healing for our present, and passionate for a future where we work together lovingly. I will sing to the hearts of all people who live on this land. Respectfully and kindly, Lady Gaga,” she added.

The Biden-Harris inaugural events will reflect Hollywood’s embrace of Democrats in general and Biden in particular, as per Variety.