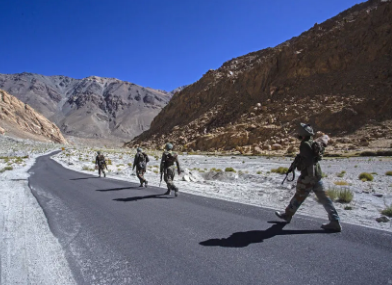 the Indian Army thwarted a provocative Chinese army movement in eastern Ladakh, the Chinese embassy claimed that Indian troops “illegally trespassed” across the Line of Actual Control on the southern bank of Pangong lake.

China’s attempt to unilaterally change the status quo on the Pangong lake was the first major incident in the area after the Galwan Valley clashes on June 15 in which 20 Indian Army personnel were killed. On August 31st, Indian troops violated the consensus reached in previous multi-level engagements and negotiations between China and India, illegally trespassed the Line of Actual Control again at the southern bank of the Pangong Tso Lake and near the Reqin Pass in the western sector of China-India border, and conducted flagrant provocations…” the Chinese embassy statement claimed.

What India has done runs counter to the efforts made by both sides for a period of time to ease and cool down the situation on the ground, and China is resolutely opposed to this. China has made solemn representations to the Indian side, urged the Indian side to strictly control and restrain its frontline troops… immediately withdraw its troops illegally trespassing the Line of Actual Control…” it added.

Earlier on Tuesday, Chinese Foreign Minister Wang Yi said that the India-China boundary is yet to be demarcated due to which there will always be problems and the two countries should implement the consensuses between their leadership to not let differences from escalating into conflicts.