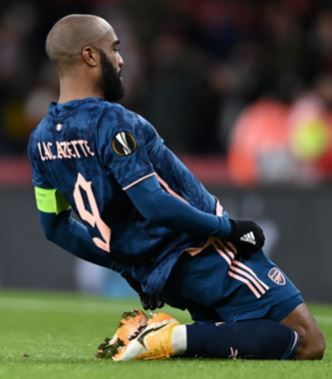 The Arsenal fans are back – and Alexandre Lacazette could be as well. The France striker has started the last two Premier League games on the bench for the Gunners, but he must now be at the forefront of Mikel Arteta’s mind for Sunday’s crucial north London derby at Tottenham following this excellent showing against Rapid Vienna in the Europa League.

Lacazette scored one and had a hand in another as Arsenal guaranteed qualification to the knockout stages as group winners with a 4-1 win in front of 2,000 fans at Emirates Stadium.

It was the first time since March that Arsenal had played in front of supporters on their own ground and they responded with a performance as good as we’ve seen for a long time.

The Spaniard made 11 changes from the team that lost to Wolves at the weekend, with Lacazette one again starting in a deeper No.10 role behind Eddie Nketiah, just as he had done in the win at Molde last week.

And the forward was the star of the show as Arsenal proved far too good for Vienna during an excellent opening 45 minutes in north London.

He opened the scoring after just 10 minutes, crashing a swerving shot past Richard Strebinger from 30 yards to end a run of eight games without a goal.

And then, soon after the returning Pablo Mari had made it 2-0 with a glancing header from Reiss Nelson’s corner as he hit the post with a smart snapshot from the edge of the box.