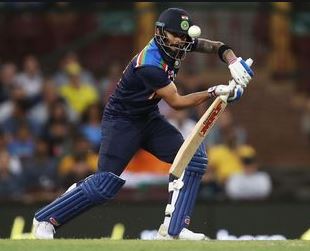 Indian captain Virat Kohli has completed 250 matches in ODI cricket and has become the eighth Indian player to achieve this feat. With this, 22 thousand runs have also been completed in all three formats. Virat achieved this feat in the second ODI against Australia on Sunday. Virat scored 89 runs in this match and now he is 23 runs away from achieving the feat of completing 12 thousand runs in ODIs. Virat has scored 11977 runs in 250 matches at an average of 59.29 which includes 43 centuries and 59 fifties.

Virat has scored 7240 runs in Tests, 11977 in ODIs and 2794 runs in T20s. He has become the eighth player to complete 22 thousand runs in all three formats. He has become the eighth Indian player to complete 250 matches in Virat ODI. Earlier in India, Sachin, Mahendra Singh Dhoni, Rahul Dravid, Mohammad Azharuddin, Saurabh Ganguly, Yuvraj Singh and Anil Kumble have played 250 or more ODIs.