KKR in playoff race with victory, Rajasthan out after defeat 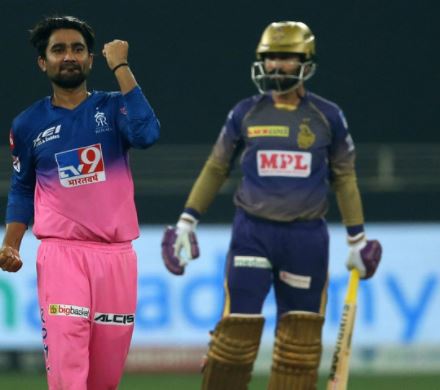 With the lethal bowling of captain Eoin Morgan (68 *) and Pat Cummins (4/34), the Kolkata Knight Riders maintained their hopes in the playoffs by beating Rajasthan Royals by 60 runs. At the same time, Rajasthan’s team was eliminated from the 13th with an eighth defeat. Kolkata’s seventh win has increased them to 14 points and comes in fourth place. Kolkata has also improved its net runrate with this win. In the crucial match played in Dubai, Kolkata Knight Riders got a strong batting score of 191 for seven wickets after getting an invitation to bat first. In response, Rajasthan’s team could only manage 131 runs for nine wickets. Cummins took four wickets in the first spell of three overs. Uthappa (06), Stokes (18), Smith (04) and Rian Parag (00) were his victims. The team’s score in the Powerplay was 41 for 5 wickets. Jose Butler 35, Rahul Tewatia (31) and Shreyas Gopal (23 not out) tried to narrow the margin of defeat.
Earlier, captain Morgan’s 35-ball innings for Kolkata included six sixes and five fours. Kolkata scored 59 runs in the last five overs. Earlier for Kolkata, Shubman Gill scored 36 and Rahul Tripathi scored 39 runs and shared a 72-run partnership for the second wicket. Andre Russell scored 25 off 11 balls. For Rajasthan, leg-spinner Rahul Teotia took three wickets for 25 runs, while Hapur’s young fast bowler Karthik Tyagi took two wickets for 36 runs.

The Kolkata team, who received an invitation to bat first, were soon shocked when Nitish Rana was caught behind the wicket of Jofra Archer without opening the account. Shubman hit three fours in Varun Aaron’s over and then sent the spinner Shreyas Gopal’s balls out of the boundary twice. Rahul Tripathi hit two fours in Gopal’s over. There were 17 runs in the fourth over of the innings. After that Ben Stokes gave 11 runs which included Rahul’s six off the last ball. In the Powerplay, Kolkata scored 55 runs for one wicket.

Rahul Tewatia then dismissed Gill and Sunil Narine in the same over. Naren could not even open an account. KKR’s score was 74 for three after nine overs. Shubman was caught by Jos Buttler at deep midwicket while Naren was caught by Stokes at long on. In the thirteenth over, Gopal sent Tripathi to the pavilion. Tewatia’s third victim became Dinesh Karthik (00). The team had lost five wickets for 99 runs at one time. Morgan then took over and hit Gopal with two fours and two sixes. 24 runs scored in the nineteenth over.