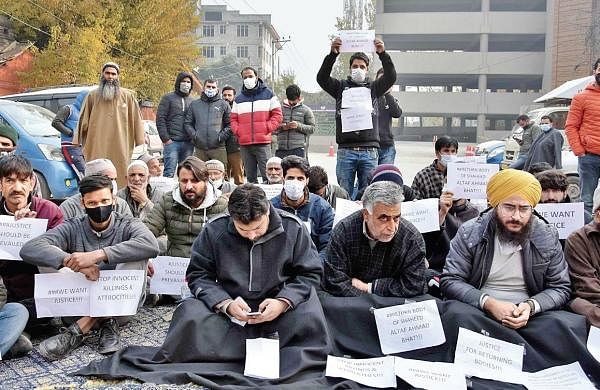 SRINAGAR: With families of three of the four persons killed in Hyderpora encounter in Srinagar claiming the men were innocent, the encounter has become controversial. The three families have also demanded return of the bodies which have been buried by the police quietly in north Kashmir’s Handwara, for proper burial and inquiry.

Mudasir was among the four persons killed in Hyderpora encounter and according to IG (Kashmir) Vijay Kumar he was an over ground worker (OGW) and running an illegal call centre in a private building.

“Police can kill me and my daughter if my husband was proven an OGW as claimed by them. Give us evidence of Mudasir being an OGW. He was a doctor by profession and earning his livelihood in a clean manner,” said Humaira.

Mudasir’s family staged a protest at the Press Enclave in Srinagar to demand the return of his body and inquiry into the incident. Family of another deceased Altaf Ahmad Bhat, who was owner of the building where the encounter happened and was among the four killed, also protested. The police detained them later.

Altaf’s brother said he is a government employee and remains in contact with police. “Had there been any allegation against my brother, police would have informed me. For 30 years, my brother had been doing business in Hyderpora area. He has got his own complex in the area and was also a builder. He was a taxpayer,” he said.

IGP Kashmir Vijay Kumar, while expressing regret over Altaf’s killing, said that the deceased would be counted among the “harbourers” of militants. According to police, a Pakistani militant Haider alias Bilal Bhai, his associate and hybrid militant Amir Ahmad a resident of Banihal, Dr Mudasir Gul (an OGW) and Altaf Ahmed Bhat (building owner) were killed in the encounter.

Aamir Ahmed’s father Abdul Latif Magray said he had killed a militant in Ramban in 2006 and how could his son be a militant. “Denial of my son’s body is the reward of my fight against militants,” he said and demanded the return of his son’s body.

The police have quietly buried bodies of the four killed in the Hyderpora encounter in a graveyard in Handwara, some  100km from Srinagar.

TRF commander among 5 militants killed in two encounters in Kulgam

The gunfights broke out in Goplapora and Pombay areas of Kulgam. IGP (Kashmir) Vijay Kumar said one of the two slain militants in Gopalpora was the commander of the TRF. He said three militants were killed in another gunfight in Pombay also.