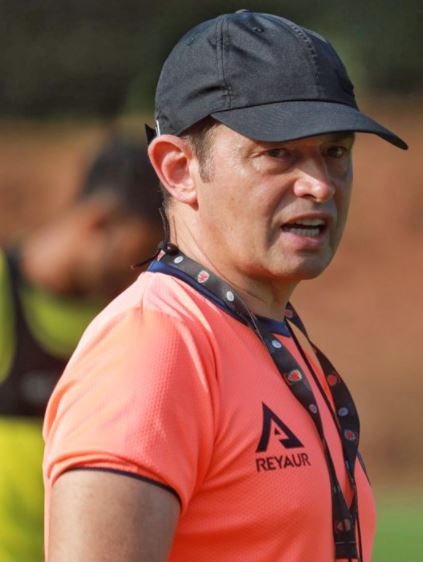 Kerala Blasters will be up against NorthEast United on Thursday evening in their second Indian Super League (ISL) game this season. The Tuskers didn’t have a great start to their campaignn as they suffered a 1-0 defeat to ATK Mohun Bagan in their opening tie.

Coach Kibu Vicuna mentioned that his side wouldn’t take NorthEast lightly given how well organised they are, as was witnessed in their 1-0 win over Mumbai City FC last week. He also pointed that his side need to work on their finishing as they can ill afford to miss goalscoring opportunities which can come back to haunt them.

“They (NorthEast) played well against Mumbai. They are a very organised team. They also had chances and tried to play out from the goalkeeper and tried to perform fast counter attacks.

“We could see 10 teams playing and the results are very even. It is going to be a very tough league, with different teams and styles. All the teams have good players and we have to focus only on tomorrow’s game,” he said.

NorthEast United coach Gerard Nus mentioned that his team will go into the game against Kerala as underdogs given that the budget of the southern team is considerably higher. However, Vicuna refused to be drawn into the conversation around how much his team has spent in the summer.

“It’s XI versus XI. In football, the budget is more for the comments of the media and the supporters. It is about passion, performances, tactics, emotions. We are in the process. Most of the teams are in the same moment. We are creating the identity. We are doing the same thing we did last season, in a shorter time,” said Vicuna, whose Mohun Bagan side played close to 30 matches before they participated in the I-League