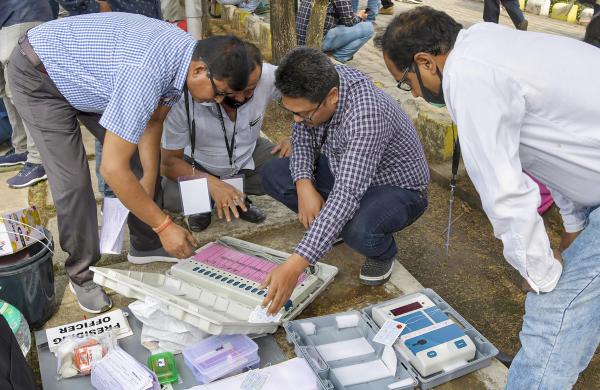 By ANI
KOLKATA: After the high-decibel polling on Thursday in Nandigram, West Bengal is all set to move into the third phase of its Assembly elections on Tuesday.

The voting in this phase of elections will be held in 31 Assembly constituencies in three districts – eight in Hooghly, seven in Howrah and 16 in South 24 Parganas.

Though ruling TMC finds itself strong in these seats, an air of anti-incumbency still can be felt here. While the BJP is targeting the TMC over the issues of corruption in the Amphan relief fund, TMC is banking on its welfare schemes like ‘Duare Sarkar’, ‘Swastho Sathi’ and ‘Kanyashree’ to counter the anti-incumbency wave, which it has highlighted in its power-packed campaigns.

Of the three districts, South 24 Parganas has a significant importance for both the top parties in the fray – Trinamool Congress (TMC) and the Bharatiya Janata Party (BJP). The district contains 31 Assembly constituencies in total and is known as a TMC stronghold. TMC managed to win 29 of 31 seats in the South 24 Parganas.

While BJP managed to make a dent in the North 24 Parganas in the 2019 elections, it failed to taste victory in South 24 Parganas. Mamata Banerjee’s nephew Abhishek Banerjee won the seat from Diamond Harbour for the second time in 2016 by a margin of over 3 lakh votes.

One of the most important factors in the South 24 Parganas is the Muslim population, which both parties will seek to draw in their favour, who have majorly supported TMC so far. The district is also infamous for intense violence ahead of polls.

Mainly known for the majestic Hooghly river, the Hooghly district houses a significant Scheduled Caste (SC) population, out of which the Bagdi community holds a massive electoral decision. The Arambagh, Goghat and Khanakul areas of the Hooghly district have seen their fair share of violence.

Although considered as a region more favourable for the ruling TMC, the 2019 Lok Sabha elections saw the BJP winning the Hooghly seat while losing the Arambagh seat to TMC.

During the campaigning ahead of the third phase polls, the Hooghly district became one of the key points of power-packed campaigns from both parties due to its cultural significance. Hooghly houses many heritage and tourist sites such as Antpur Math, Taraknath Temple, Ananta Basudeba temple and more.

For the Arambagh seat in the third phase, TMC is fielding Sujata Mondal Khan, whose husband, Saumitra Khan, is a BJP MP from Bishnupur. Mondal, a former BJP member, had decided to switch to TMC, after which her husband sent her a legal divorce notice.

Popularly known for its iconic Howrah bridge above the Hooghly river, the Howrah district is the hub of engineering and shipbuilding firms, its reputation although got dented in terms of civil infrastructure. Having 16 Assembly constituencies, the district was considered as a bastion of the Left government until its defeat in 2011.

Howrah is also home to a large Muslim population, which has made it a target of polarisation techniques for elections. The district also saw a large number of high-profile campaigns in the run-up to the elections.

The districts of Howrah and Hooghly hold great significance in the upcoming two phases of the West Bengal Assembly polls, where the BJP has increased its presence in the 2019 general elections. Furthermore, several TMC members – including former minister Rajib Banerjee from the Domjur constituency – have defected from the party to join the rival BJP.

Striving to prove that “Bangla nijer meyekei chaye” (Bengal wants her daughter), Chief Minister Mamata Banerjee played her hand on the regional cards while calling the BJP as ‘bohiragoto’ (outsider). She tossed the debate of insider versus outsider and spared no stage to launch attacks on the BJP brigade.

TMC government is charged with issues of ‘syndicate raj’, ‘tolabaazi’ (extortion) and corruption in the state. While Prime Minister Modi has been promising BJP’s version of ‘Sonar Bangla’ (prosperous Bengal) in his rallies.

Meanwhile, the Left Front, which had its dominion in these areas once, has kept its campaign relatively in low profile while its candidates held door-to-door canvassing.

Polling for the first two phases of the West Bengal polls were held on March 27 and April 1 respectively. The fourth phase of polling will take place on April 10.