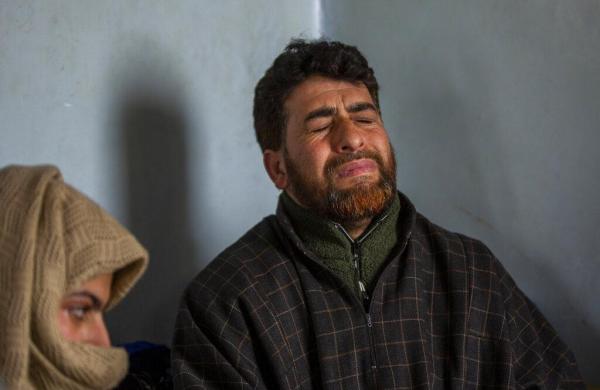 By Associated Press
SRINAGAR: Police have charged a Kashmiri man seeking the body of his teenage son, who was slain by government forces, with conspiring to organize illegal processions, officials said Monday.

Government forces fatally shot Ahmed’s 16-year-old son, Athar Mushtaq, and two other young men on Dec. 30 during what police described as a gunfight after the men refused to surrender on the outskirts of Srinagar city. They described the men as “hardcore associates of terrorists” opposed to Indian rule in Kashmir.

Authorities buried them at a remote graveyard about 115 kilometers (70 miles) from their ancestral villages. Under a policy started in April 2020, Indian authorities have buried over 150 alleged Kashmiri rebels in unmarked graves, denying their families proper funerals. The policy has added to widespread anti-India anger in the region.

The young men’s families have protested repeatedly seeking their bodies, while insisting they were not militants and were killed in cold blood. There is no way to independently confirm either claim.

The killings and remote burial drew widespread public mourning. Videos on social media in which Ahmed sought his son’s body triggered an outburst of emotions as thousands rallied behind a “return the bodies” campaign.

Last month, Ahmed dug a grave for his son at his village, demanding that his body be exhumed and returned for burial at his ancestral graveyard. The grave remains empty.

Two police officials who spoke on condition of anonymity in keeping with government regulations said the defendants conspired to organize illegal processions, abetted anti-national elements and spread disaffection against the state.

The defendants have not yet been taken into custody.

The anti-terror law was amended in 2019 to allow the government to designate an individual as a terrorist. Police can detain a person for six months without producing any evidence, and the accused can subsequently be imprisoned for up to seven years. Rights activists have called the law draconian.

“Police are seeking my silence,” Ahmed said by phone from his home on Monday. “But I refuse to be silenced. I will keep seeking justice and my son’s body.”

India has long relied on military force to retain control over the portion of Kashmir it administers. It has fought two wars over the region with Pakistan, which also claims the mountainous territory. An armed uprising since 1989 against Indian control and subsequent Indian crackdown have killed tens of thousands of civilians, rebels and government forces.

In August 2019, India revoked Kashmir’s semiautonomous status, clamped curfews and communication blackouts on the territory and arrested thousands, sparking outrage and economic suffering. Since then, authorities have introduced new laws and implemented policies that critics say are part of a plan to colonize the volatile region with Indian settlers.

Indian officials have said such measures are necessary to integrate the region with India, foster greater economic development and stop threats from “anti-national elements” and Pakistan.