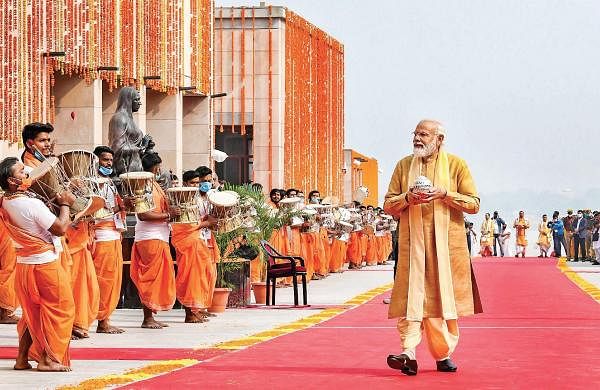 LUCKNOW:  Lord Shiva. History of Kashi as a place which defied invaders. Restoring the glory of temples. Prime Minister Narendra Modi’s thrust was broadly on these themes during his speech after inaugurating Phase I of Kashi Vaishwanath Corridor in Varanasi. Uttar Pradesh is headed for Assembly elections early next year. The PM invoked Raja Suheldev, a royal who was popular in eastern UP for defeating the army of Muslim invader Salar Masood. He also hailed Chhatrapati Shivaji for standing up to Aurangzeb.

Clad in saffron with a ‘rudraksha mala’ around his neck, a ‘kalash’ (water pot) in his hands and chanting shlokas, the PM was seen in his Shiva devotee avatar. He took a dip in Ganga at Lalita Ghat, worshipped the Sun God for nine minutes standing in waist-deep water before proceeding to the temple to perform other rituals. “There is only one government in Kashi and that is the one ruled by Damaruwala (Lord Shiva). The blessings of Lord Shiva, a supernatural energy, awakens our inner soul as soon as we enter Kashi which is immortal,” Modi said.

While proceeding to Kaal Bhairav temple, Modi broke security protocol at various spots and accepted headgear and shawl offered by common people of Varanasi who showered petals on him. “Kashi avisnashi hai (Kashi is immortal). Invaders tried to destroy the city but Kashi withstood every attack as sultanates rose and fell. If any Salar Masood comes here, brave warriors like Raja Suheldev makes the invader feel the power of unity.  History is witness to Aurangzeb’s atrocities.

He tried to change civilisation by the sword. But the soil of this country is magical. If an Aurangzeb comes, a Shivaji also emerges,” said the PM. He also mentioned how British Governor General Warren Hastings had to make a hasty retreat in the guise of a woman from Kashi.

In an emotional tone, the PM said Kashi Vishwanath temple as the abode of Lord Shiva reflects India’s ancient history. “One will take pride in coming here as this is a confluence of the ancient and new. The new complex of Kashi Vishwanath Dham is not just a grand building, but a symbol of our sanatan (traditional) culture, spiritual soul and India’s antiquity and traditions. New India is proud of its culture and also has confidence on its ability. There is virasat (legacy) blended with vikas (development).”

Modi added that Vishwanath Dham is full of energy. “Many ancient temples lost have been restored again. They used to say restoration of Vishwanath Dham was a daunting task and nobody could do it. Many Modis have come and gone but no one could change it.”

Modi maintained the spirit till late in the evening when he was accompanied by the CMs of the BJP-ruled states to witness Ganga Aarti. All ghats of Varanasi and houses were illuminated with 11 lakh diyas.

11 am Lands at airport. Leaves straight for Kaal Bhairav temple

11.40 am Arrives at Khirkiya Ghat. Dedicates ghat to people

11.55 am Takes cruise ride in Ganga towards Lalita Ghat

5.30 pm PM and CMs of BJP-ruled states take a ‘Ro-Ro’ boat ride to Dashashwamedh Ghat to witness the Ganga Aarti