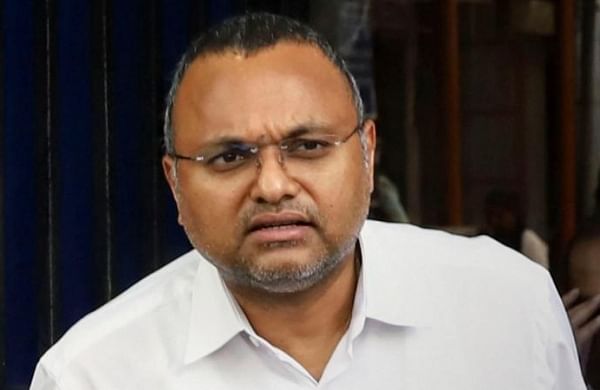 NEW DELHI: Congress MP Karti Chidamabaram on Friday wrote to Lok Speaker Speaker Om Birla alleging that during a raid CBI officers seized “highly confidential” personal notes and papers pertaining to the Parliamentary Standing Committee on Information and Technology of which he is a member, and sought redressal for what he said was a “breach of his parliamentary privilege”.

In a letter to Birla, Karti Chidambaram also said that over the course of the past few years, his family and he himself have become targets of a “relentless campaign by the present government and its investigating agencies which are trying to silence our voices of dissent by foisting one fake case after another”.

Such “targeted intimidation” of a member of the House amounts to a breach of privilege, the MP from Tamil Nadu’s Sivaganga constituency said.

Karti Chidambaram’s letter to Birla comes amid his questioning by the CBI.

He appeared before the CBI for the second day on Friday to answer queries related to allegations of bribe in issuance of visas to 263 Chinese workers in 2011 when his father P Chidambaram was the home minister, officials said.

Earlier this month, CBI teams had conducted coordinated search operations at 10 locations in multiple cities in the country, including residences of the Chidambarams in Chennai and Delhi.

“I am writing to you now because I have become the victim of a grossly illegal and patently unconstitutional action,” Karti Chidambaram said in his letter to Birla.

“The Central Bureau of Investigation in the garb of conducting an investigation into an 11-year-old decision of the Government in which I have absolutely no involvement raided my residence in Delhi,” he said.

In the course of this so-called raid, certain officers of the CBI seized my “highly confidential and sensitive personal notes and papers” pertaining to the Parliamentary Standing Committee for Information and Technology, Karti Chidambaram alleged.

“Shockingly, even my draft notes and questions which I had intended to ask witnesses summoned to the Committee, were also seized,” he alleged.

He claimed that his handwritten notes pertaining to the depositions made to the Committee by witnesses were also seized for reasons best known to the Agency.

Karti Chidambaram alleged that these actions by the CBI, in so far as they relate to “interference with my duties as a Parliamentarian, amount to a direct assault upon democratic principles on which our Parliament is founded”.

“I, therefore, urge you to take immediate cognizance of this issue, which is a brazen breach of my Parliamentary privilege,” he said in the letter.