Karma Festival 2020: Folk festival of North Chhattisgarh is associated with the worship of nature 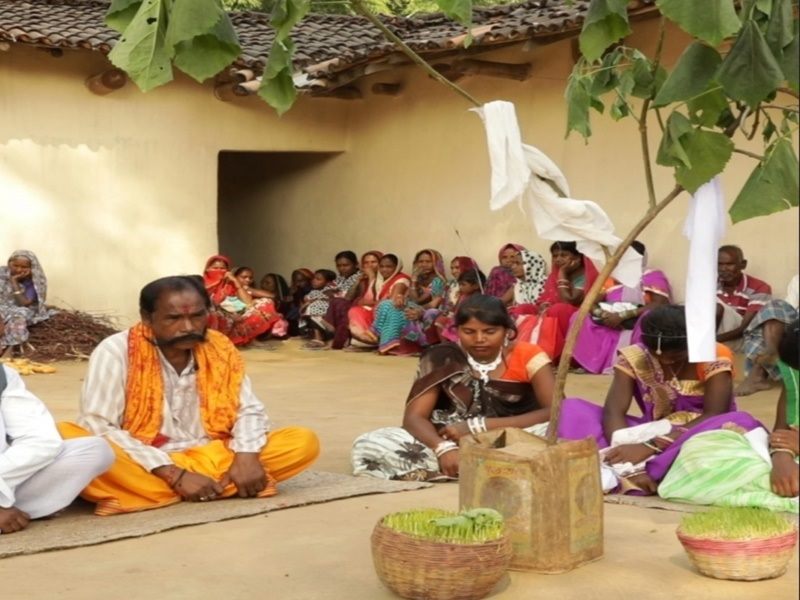 Karma Festival 2020: Ambikapur. Karma, a folk festival celebrated in Sarguja region of northern Chhattisgarh, will be celebrated with pomp today. The tribal family has started preparing for it since morning. Throughout the day, women and men will fast and sit in one place in the village and worship the Karmi tree in the courtyard courtyard. The Baiga Karam of the village will narrate the story of the deity. After the story, female men will dance in the beat of the folk musical mandar and in the cymbal jhanka. The folk festival celebrated on Ekadashi of Shukla Paksha of Bhado month is based on the worship of nature.

Karama folk songs are also very famous in Surguja. Karma folk songs have also taken modern color now. After the late evening puja archana, when the women dance to the beat of the male mandar and the jhankar of the cymbals and the modern song… Hi Re Mor Sarguja Naache .. Alathi Kalathi Mandar Baje…. Similarly, the traditional Karama song …. Saavan .. Bhado .. Kar Jharia … Kabar Bheje Re Goria …. Oh Re … Ye Re … ki taan ki teh jaan, the whole atmosphere is immersed in excitement and excitement goes.

Folk festivals are directly related to agriculture and environment. The folk life of the tribes of Surguja region is basically based on agriculture and forest. The farming community expresses its sentiments through folk festivals. ‘Karama’ festival is one of the most talked about folklore. The dance performed on this festival is called Karma dance. Every festival has a folk history behind it. There are many legends related to celebrating Karma festival.

This is the legend related to Karma

According to folk songwriter Vijay Singh, according to the tribes of Jharkhand, there were two brothers named Karama and Dharma. Karma showed the importance of karma and Dharma showed the path of pure conduct and religious life. Karma is considered to be the form of both of these brothers and their worship and dance are done every year to please them for achieving good rewards. The tribal society worships nature, hence the tree named Karami is buried in the courtyard as a symbol of the deity Karam deity. The tribal tribes of Surguja and some other tribal peasantry work hard in the fields and expect a good harvest from the deity Karam. To make them happy, they worship and dance.

Folk lyricist Vijay Singh explains- The word ‘Karama’ indicates Karma (diligence) and Karam (fate). ‘Man should do good deeds regularly and luck should also support him.’ The deity of Karam is worshiped with this desire. This festival is celebrated on the Ekadashi of Bhadrapad Shukla Paksha. In Sarguja zone on this day, the sisters fast for the longevity of their brothers throughout the day and break the fast by taking prasad after worshiping Karam Devata at night. In the Karma festival, a branch of a tree called ‘Karami’ is traditionally installed in the courtyard of the prominent person. That cast is considered to be the symbol of the deity and worshiped.

Women prepare a week before

A week before the Karma festival, on the day of Teeja festival, barley, wheat, maize are sown in the basket which has grown till the Karma festival. In the local dialect, it is called ‘Jai’. In the same ‘Jai’, they light a lamp of clay, decorate it with flowers and place a cucumber in it and offer it at the feet of Karam Devta. After this, with the Akshat (rice) in hand, listen to the story of Karam Devta in local language. Karama Dance and Songs Karma dance is performed by wandering around the Karam deity throughout the night after offering prayers and worshiping the deity. The women dance in a circle in a circle and the men are singers, instrumentalists and dancers in their midst.

Many types of Karama dances are performed in Surguja Zone. In addition to Raas Karama (Bhadrapada Ekadashi), it is also performed in Aate Parva (Sri Krishna Janmashtami), Teeja Parva (Haritalika Teej), Jintaviya Parva (Putrakashwaka), Dashain Parva (Dussehra) and Deothan Parva (Karthik Ekadashi). Mandar, cymbals, mohri (shehnai) etc. are used as instruments. In the Karma festival, after serving the deity Karam through song and dance throughout the night, immerse him before sunrise.