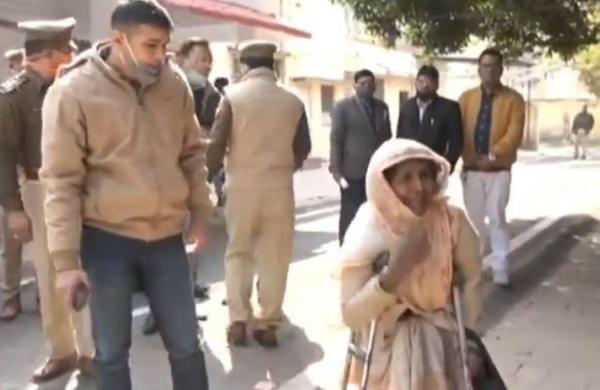 Express News Service
LUCKNOW: The inhuman face of Kanpur police was exposed yet again when they allegedly demanded money for fuel from an elderly physically challenged widow to launch a search for her missing minor daughter.

Taking strict action against the erring cops of Chakeri police station, Kanpur SSP/DIG suspended two SIs with immediate effect and issued orders to recover the girl at the earliest.

Following the crackdown by the senior officials, the girl who had gone missing from the Chakeri locality of Kanpur on January 7, was rescued from the residence of her relative Thakur at Naubasta, another locality in the city on Wednesday evening. The minor was living with Thakur at his place. Thakur was arrested and sent to jail.

To her utter shock, despite repeated visits to the police station, the woman failed to get any respite and was asked to pay for the fuel. Following this, the woman met Kanpur SSP/DIG Preetinder Singh and narrated her ordeal.

The woman, who lodged an FIR on January 9, alleged that her daughter was kidnapped by one of her distant relatives. Though an FIR was filed, police took no initiative to look into the matter, she further said.

After hearing the woman, the SSP/DIG went through her complaint which said that Sanigwan police out-post in-charge Rajpal Singh had forced her to spent Rs 10,000 to 15,000 for arranging fuel for the police vehicles to launch a search for her missing daughter. The SSP/DIG issued orders to suspend Rajpal Singh and inquiry officer Sub-Inspector Arun Kumar for dereliction of duty and ordered a probe into the issue.

“A probe has been ordered into the alleged police apathy in the case,” SSP/DIG Preetinder Singh said, adding that four teams were set up under the supervision of Circle Officer Cantt to search the woman’s minor daughter as early as possible.

The issue came to the fore when the video of the woman visiting the SSP/DIG office on crutches went viral on social media. The video clip drew the wrath of netizens who went on to ask the police to act tough against the erring personnel.

Speaking to media persons at the SSP/DIG’s office, the woman said that she had filed a case about her missing daughter last month. The police, however, did not pay heed to her complaint. “They then said if I fill diesel in their vehicles, they will search for my daughter,” said the woman.

She claimed that she had borrowed and paid Rs 10,000 to 15,000 for fuel of the police vehicles to get her missing daughter rescued.