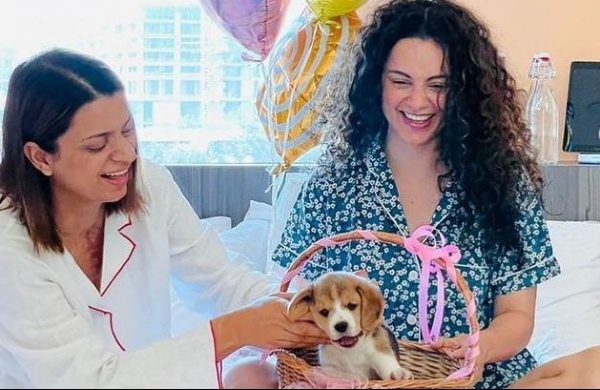 By ANI
NEW DELHI: Hindi film actor Kangana Ranaut and her sister Rangoli Chandel have moved the Supreme Court seeking the transfer of criminal cases pending against them in various courts of Maharashtra’s Mumbai to Shimla in Himachal Pradesh.

Ranaut and Chandel claimed that they face a threat to life if the trials proceed in Mumbai, because of the personal vendetta of Shiv Sena leaders against them.

Ranaut in her plea said that looking at the threat perception, she was granted Y-plus category of CRPF security by the Home Ministry, therefore, it becomes quite evident that they “face a serious threat to life and property and if the trial of the cases are not transferred out of Mumbai their life will be at risk.”

Various cases were filed against both the sisters including the criminal defamation complaint by veteran lyricist, Javed Akhtar alleging that Ranaut had made defamatory remarks against him on Republic TV after the death of actor Sushant Singh Rajput.

Advocate Ali Kashif Khan Deshmukh had also filed a criminal case against them in Mumbai for allegedly causing disharmony between Hindus and Muslims by her tweets. He had cited the example of Ranaut’s tweet on Mumbai turning into “Pakistan Occupied Kashmir”.

A sedition case was filed by casting director Munawar Ali Sayyed, who alleged that Ranaut and her sister tried to create a communal divide through social media and they deliberately made the tweets to bring hatred and excite disaffection towards the Maharashtra government.

The sisters have now approached the top court urging to transfer all the cases to Himachal Pradesh, their home state.

In their petition, Ranaut stated that “Shiv Sena will leave no stone unturned to eliminate her, because of her continuous outspokenness against the wrongs done by the Shiv Sena in collusion with big names of the Hindi film industry.”

Ranaut in the plea pointed out that Sanjay Raut, who is a senior Shiv Sena leader and a Member of Parliament had used inappropriate words against her and the Shiv Sena-led Brihanmumbai Municipal Corporation (BMC) illegally demolished her Pali Hill Bungalow. The plea added that the Bombay High Court has declared the BMC’s act of demolishing a part of her bungalow illegal, and added that it smacked of malafide intentions.

Ranaut and Chandel further stated that while they have utmost faith and respect for courts in the country, they apprehend a threat to their life and property if the trial in the cases continues in Mumbai. They also alleged harassment at the instance of the Maharashtra government led by Shiv Sena.