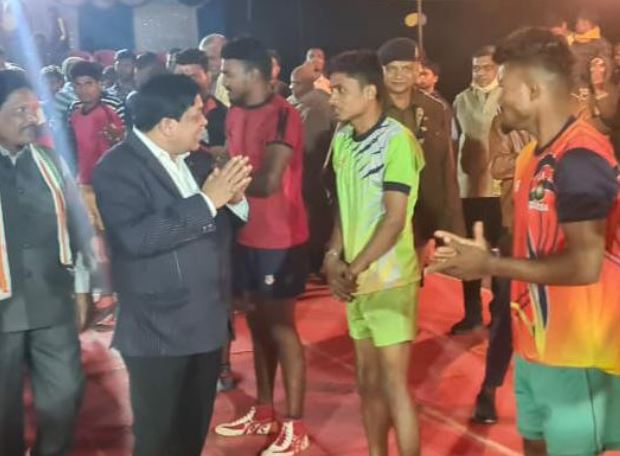 Urban Administration and Development and Labor Minister Dr. Shivkumar Dahria participated in the Kabaddi competition held at Village Guma under Arang assembly constituency. During his participation in the Kabaddi competition in the village Guma, Minister Dr. Dahria said that kabaddi is the favorite sport of the villagers. This game is organized in every village. There are a large number of people who play and watch it in the village. He said that defeat in the game keeps losing and winning. Therefore, this game should be played with the spirit of the game. This gives an opportunity to advance in the field of sports with physical development. This type of organizing in the village also proves to be important for the promotion of rural talent. The government of Chhattisgarh is also continuously working towards advancing sports and sportspersons in the state and sports grounds are also being developed. He also presented a prize of ten thousand rupees to the organizers. During this, Khilesh Dewangan President Janpad Panchayat, Pintu Kurre, Komal Sahu, Sarpanch Dinesh Kosariya, Mansing Kosariya, Upasarpanch Hiralal Sahu, Shatruhan Sahu, Hemlal Sahu, Panchgan, Teman Sahu Buth Chairman Guma, Ramdayal Verma, Johan Sahu, Sheetal Sahu, Organizing Committee Villagers including Teneshwar Dhruv, Dileshwar Sahu, Ravi Sahu, Mahendra Sahu were present.