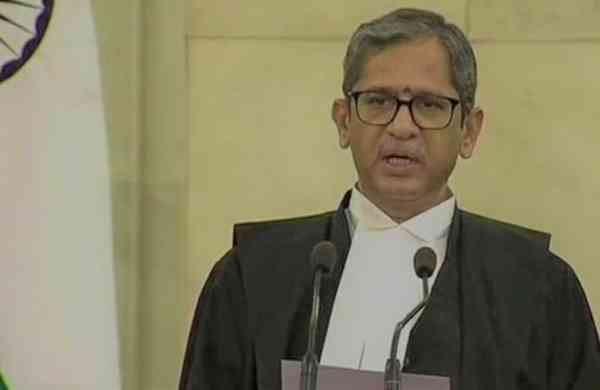 By Express News Service
NEW DELHI:  Justice Nuthalapati Venkata Ramana was on Saturday sworn in as the 48th Chief Justice of India and will hold the post for sixteen months till August 26, 2022.He is taking charge amid a health emergency in the country prompted by a surge in Covid cases. His predecessor and former CJI S A Bobde had taken suo-moto cognizance of the issue of oxygen supply shortage, but could not take any major actions. He had slated a hearing for April 27.

Soon after being sworn-in, Ramana held a consultation with six senior judges of the court to review functioning in view of present Covid-19 situation. Further, Ramana’s tenure is expected to see the filing up of more vacancies for judges at both the Supreme Court as well at the High Courts.Apart from, CJI Ramana, the new collegium would comprise four justices- R F Nariman, U U Lalit, A M Khanwilkar and D Y Chandrachud.

President Ramnath Kovind administers the oathof office to Justice N V Ramana at theRashtrapathi Bhavan on Saturday | PTIThe inclusion of more women judges in the higher reaches of the judiciary, a goal laid down by former CJI S A Bobde, now falls on the shoulders of Ramana.The name of Senior Judge B V Nagarathna from the Karnataka High Court is doing the rounds. If elevated now, she will be in line to become the first woman Chief Justice of India in 2027, for a period of eight months.

Similarly, Chief Justice of Telangana High Court Justice Hima Kohli’s is also being considered for elevation. If appointed now,  her tenure will run till 2024, or else she will retire in September this year. Though these names have been discussed many times in the collegium meetings, no consensus has been reached. So, all eyes will now be on CJI Ramana who is expected to break the ice and give India its first women Chief Justice, several years after independence.