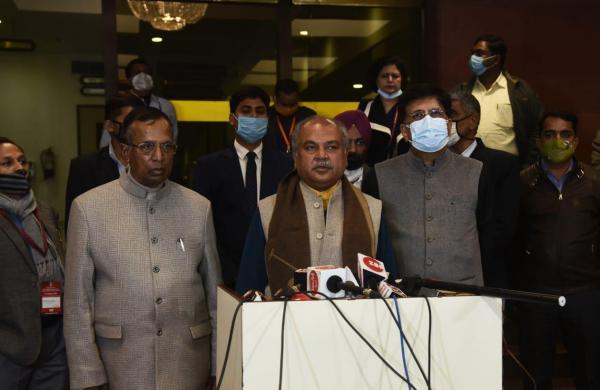 By PTI
NEW DELHI: Hours before the eighth round of formal talks between the Centre and the farmers’ groups agitating against three recent farm laws, Union Minister of State for Agriculture Kailash Choudhury hoped that a resolution will come out of Friday’s meeting.

The eighth round of talks between three Union ministers — Narendra Singh Tomar, Piyush Goyal and Som Parkash — and the 40 protesting farmer unions to end the farmers’ agitation is scheduled to begin at the Vigyan Bhawan here at 2 pm.

Just before the talks, Union Agriculture Minister Tomar is likely to call on Home Minister Amit Shah to discuss the issue, sources said.

Talking to PTI, Choudhury said, “I am hopeful that a resolution will be reached at Friday’s meeting. We could have ended the deadlock by now had the protesting farmer unions discussed the issues raised at the first meeting.”

There was no demand for a repeal of the three farm laws at the first meeting, he added.

Asserting that the new laws enacted by the Centre are in the interest of farmers, Choudhury said the legislations are just a beginning and added that the unions are agitating against the laws under the “influence of arhtiyas (commission agents)”.

“Next, the Pesticide (Management) Bill and the Seed Bill will come. At that time too, farmers can be misguided,” he said.

Asked if the Centre would encourage religious leaders from Punjab to mediate between the government and the protesting farmers, Choudhury said, “We welcome everyone. We want a resolution. If they are ready to talk in that direction, we welcome them.”

Punjab’s Nanaksar Gurdwara head Baba Lakha, a renowned religious leader of the state, met Tomar on Thursday and wished to mediate between the Centre and the protesting farmers.

The last seven rounds of talks between the Centre and the protesting farmers remained inconclusive, although there was some breakthrough at the December 30 meeting when the government conceded to two demands of the agitating farmers pertaining to power subsidy and stubble-burning.