JP Nadda To BJP Workers At Organisational Meet In Bengal ‘: Expose All Corruption In TMC 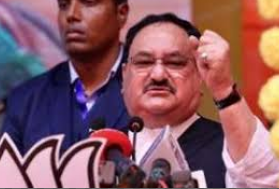 BJP national president JP Nadda on Monday directed the party workers to expose all the corruption in the Trinamool Congress government in West Bengal. In an emergency organizational meeting held with BJP workers in Siliguri, Nadda directed them to inform people about the tyranny of the ruling party and the culture of cut-money in the state.

After the meeting, West Bengal BJP General Secretary Sayantan Basu told reporters that detailed discussion was held on the preparations for each Assembly constituency in light of the upcoming elections. Nadda laid emphasized on enhancing the performance and efficiency of the party at the booth level.

Basu said the BJP national President expressed dissatisfaction with the TMC’s terror in the state. BJP workers in Bengal are facing fierce struggle every day and he also expressed concern over the killing of more than a hundred party workers. Besides, the State Government’s negligence in dealing with Coronavirus pandemic was also discussed in the meeting, he added.

During his day-long visit to North Bengal, JP Nadda paid tributes to Tagore Panchanan Burman at a ceremony at Nauka Ghat and later visited the Anandamoyi Kalibari Temple.