Jo Sung-hee’s ‘Space Sweepers’: A slick space ride with a lot of heart 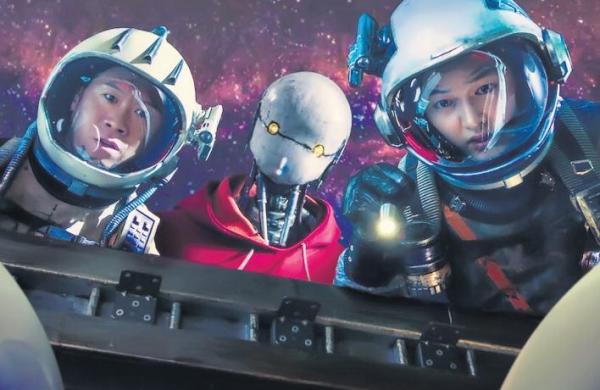 Express News Service
Cinema can do a lot of things. It can educate, inspire, even indoctrinate. But most of all, we mainly want cinema to entertain. Hence the enduring popularity of blockbusters. One such has found its way recently to Netflix. Billed as the first Korean space blockbuster, Jo Sung-hee’s Space Sweepers serves its purpose and provides entertainment in spades. The film is set in the dystopian near-future of 2092 when the earth has become nearly uninhabitable and a mega-corporation named UTS has created a lush, green orbiting colony that the lucky few can live in.

The vast majority of humanity, however, are deemed non- UTS citizens and have to live on the dying earth or one of the grungy residential districts in space for non-citizens. Some of them eke out a living by collecting space debris a lot of it has accumulated over the years and is floating around space much like our oceans of the present. These people are called space sweepers and include our protagonists of the ship Victory. Now, that sounds like a bleak beginning and dystopian space stories are usually quite grim (the earth here, in fact, looks a lot like the one in Blade Runner 2049).

But, while Space Sweepers wears its themes on its sleeves, it isn’t self-serious about it. There’s a lot of casual humour thrown in. And the film rides on the strength of its principal cast. Their interactions are what make Space Sweepers so endearing. Aside from the motley crew of Victory, this includes the little girl they discover in one of their salvages. At first, they are annoyed by the burden, but when they see a news broadcast that informs them the girl is actually an android named Dorothy with a deadly bomb inside, they want nothing to do with her. Until, that is, one of them realises they can ransom her and make some much-needed money.

As you’d expect, they soon find themselves charmed by the little girl and start caring for her (props to the makers for not making her either precocious or cloying and to the child actor Park Ye-rin for treading the line nicely). And of course, there’s more to her than meets the eye and somehow the fate of the whole world hangs in the balance. The plot is quite predictable for any science fiction fan, or even just anyone that’s watched blockbusters before. But again, this isn’t a film you watch for its plot or big ideas. It’s all about entertainment. As sci-fi goes, this is less Star Trek and more Star Wars.

The production values are top-notch. The CGI and production design are on par with anything you’d get from Hollywood, and it’s really a pity the makers had to settle for an OTT release due to the pandemic. Some of the action sequences in space are truly spellbinding. And the details inside the ship are delectable. There is one point where Space Sweepers scores above Star Wars. The robot crew member here is way more interesting than those found in that venerable franchise. In fact, Bubs stands out even in this film with its broad strokes and offers a surprisingly subtle exploration of gender identity.

Bubs is a robot who wants to get a skin graft and become human in appearance. But rather than go the usual AI-wanting- to-be-a-person route (a la Data from Star Trek or even Pinocchio), Space Sweepers uses a male actor to voice Bubs who identifies as female. This trans angle is not forced at all and never explicitly spelled out, except perhaps at the very end. Early on, we get a passing shot of Bubs looking through skin graft options which are all female in appearance. And later, Dorothy uses a female pronoun when addressing Bubs, causing the latter to blush with delight.

It’s easily the film’s most touching scene, for my money. Equally casually treated is the diversity of the cast and the variety of languages used in the film. Unlike films that make everyone speak the same language, no matter how incongruous it may be to the setting, Space Sweepers introduces an inear translation device that allows its characters to speak several different languages as you’d expect in a truly global community.

And incidentally, this future world offers some interesting parallels to our own present as well. The arbitrary division of society into citizens and non-citizens is eerily familiar. As is the labelling of environmental activists as terrorists. These accidental analogies aside, however, Space Sweepers offers a lot of relatability for everyone, everywhere and is a very promising first step into space for Korean cinema. More, please!

A biweekly column that focuses on the notable content available on the wide variety of streaming platforms around you.