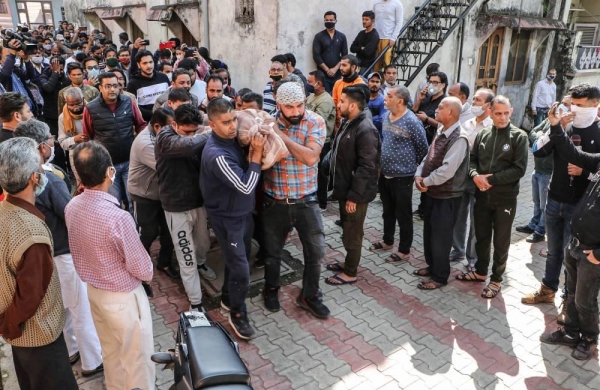 Express News Service
SRINAGAR:  The son of a popular dhaba owner in Srinagar, who was critically injured in a militant attack on February 17, died in a hospital on Sunday.

It is the second killing of a non-Kashmiri by militants in Srinagar since December 31, 2020. Akash Mehra (22), son of Krishna Dhaba owner Ramesh Kumar Mehra, succumbed to injuries at SMHS hospital in Srinagar, doctors said.

He was undergoing treatment after being shot at inside the Dhaba in Durga Nag area of Dalgate in Srinagar.

A delegation of foreign diplomats was on a two-day trip to Jammu and Kashmir at the time. Akash had sustained two bullet injuries.

His body was taken to his native place at Janipura in Jammu. A large number of people attended the cremation.

The area where the militants struck is a highly secured area. Few metres ahead lies the United Nations Military Observers office, which is highly guarded.

The police station is a few hundred metres from the spot.

On December 31, 2020, militants shot dead 67-year-old jeweller Satpal Nishal inside his shop at Hari Singh High Street in Srinagar. Satpal had received a domicile certificate a few days before being shot. Akash’s father Ramesh told this newspaper that the attack on his son was not linked to the issuance of a domicile certificate as they were residents of the erstwhile J&K state.

Militant outfit Muslim Janbaz Force, which was active in the 1990s, claimed responsibility of the attack and warned that it won’t allow India to change the demography of Kashmir through domicile law.

Two days after the attack, IGP of Kashmir Vijay Kumar said police had cracked the case by arresting three militants. He said they are new recruits.

“The pistol and bike used was also seized,” he said, adding that Muslim Janbaz Force was an off-shoot of Lashkar.

PDP president Mehbooba Mufti on Sunday advised the youth that guns and stones were futile as she went on to urge the Centre to hold talks with the people from Jammu and Kashmir.

“We believe there is no other option other than dialogue. Young boys are taking up guns and dying in encounters,” Mehbooba told reporters at Pulwama in south Kashmir.

If talks can be held with China and Pakistan, Mehbooba Mufti said, the Central government too should hold dialogue constructively with the people, especially the youth, so that killings and bloodshed stop in J&K.

“The gun is no solution to any problem. We should always keep peaceful means as our lodestar and not lose sight of the fact that there are elements who wish to bracket us as violent and extremist to delegitimise our aspirations and our struggle,” the former J&K chief minister said.

Kashmiris should learn from the farmers’ agitation, she said.

“The farmers neither have stones nor guns. The whole world is advocating their cause and building pressure on the government to hold dialogue with them to resolve the issue.”