Jhingan is ready to experience Kolkata derby for the first time 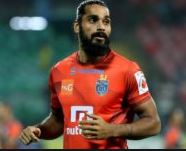 Currently one of the biggest names in Indian football, Sandesh Jhingan is ready to experience the Kolkata Derby for the first time. The defending champions Atiq Mohun Bagan will face East Bengal at the Tilak Maidan Stadium in Vasco de Gama on November 27 in the first ever Kolkata Derby of the Hero Indian Super League and Jhingan will be the center of attraction in this match.

After spending six seasons with Kerala Blasters, Jhingan took a big decision early in the summer and decided to part with Kochi franchise Blasters. His new destination was ATKMB, which has signed a long five-year deal with him. Coach Antonio Lopez Habas was quick to know what he had for the 27-year-old defender. In ATKMB, Jhingan was one of the five captains who were promoted.

Jhingan will now get experience of playing in the second match of ATKMB, but these defenders are taking this match like other matches. Jhingan said, “It is one of the biggest derbies in the world. Being a footballer, you want to be a part of such big forums, so I am very excited about it. I do not see the importance of the game more deeply, whether it is the Kolkata derby or any other match. For me it is all the same. All matches are important, so I don’t let emotions dominate me. The coaches and staff are also seeing it as a game of football. “

It is not that Jhingan does not understand what this match means for fans of both clubs. But he is focusing only on making sure that his team returns from this match with three points. He said, “Derby has a rich history and has deep roots in Indian football. Hopefully, now I get a chance to be a part of it. Kolkata derby is good for Indian football and fans, but we currently live and I have to do my job. Take three points and get a clean sheet like other teams.