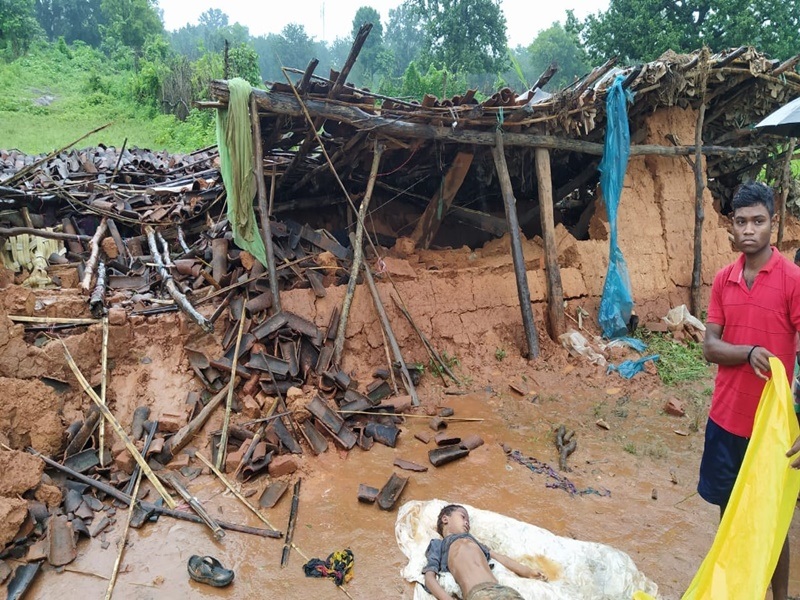 Jashpur News: North Chhattisgarh, due to heavy rains for the last three days, life has been severely affected. River drains are in spate and water has also entered the villages. At the same time, in the village panchayat Dumariya of Farsabhar, development block of Jashpur district, a crude house collapsed due to rain. The innocent child asleep inside the house got hit by debris and died. A child and a woman were also seriously injured in this incident.

According to the information, Hariram father Jodhan Ram, age 27, a resident of Sukhwasu Para, village Dumariya, lived with his family in a kutcha house in the village. Continued rains for two days caused his crude house to collapse between 6 and 7 am on Thursday morning. There are 5 members in the family, including Hariram’s mother, wife and two children. Hariram has gone out to earn and there is a tragedy on his family here. 8-year-old son Tilak Ram died of mud house collapse. Hariram’s wife has been admitted to Farsabhar Hospital due to serious injuries. Also, the demolition of the house broke the hand of Dharamu Ram, the 9-year-old girl of the neighbor, by her father. He is admitted to the hospital for treatment.

After receiving the news of the incident, the administration team has also reached the spot and the family victims of natural disaster are being helped. Due to the collapse of the house during the rainy season, the entire family has come under severe crisis. Quick financial assistance is being provided to the family by the district administration.

Information has been received through you. I make arrangements to provide whatever help and assistance is available immediately. And also going to the scene of the incident.