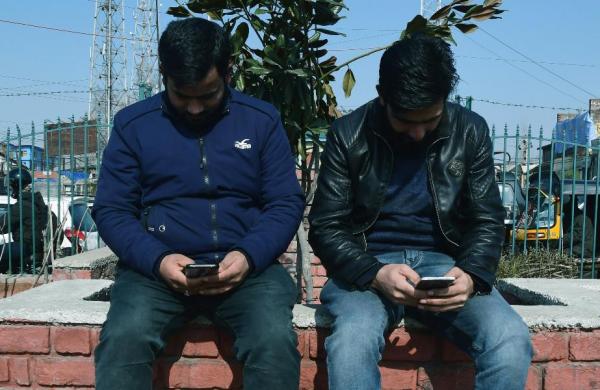 By PTI
JAMMU: Having faced several hardships for over 18 months due to the suspension of high-speed internet, people of Jammu and Kashmir especially students, professionals and those belonging to the business community were elated on Saturday following the restoration of 4G mobile internet services across the union territory.

However, the development once again brought into focus the demand for restoration of statehood to the Union Territory.

The high-speed mobile internet was on Friday restored in Jammu and Kashmir, exactly one and a half years after it was snapped in August 2019 when the Centre had abrogated the special status of the erstwhile state.

Internet was completely shut on August 5, 2019 when the government announced abrogation of Article 370 of the Constitution and also its bifurcation into two union territories — Jammu and Kashmir, and Ladakh.

On January 25 last year, 2G services were restored while 4G services on mobile devices in Ganderbal in Kashmir division and Udhampur in Jammu region was restarted in August last year. People were seen congratulating each other and some politicians, mostly opposition leaders, used the occasion to advocate the restoration of statehood and early assembly polls.

Students were perhaps one of the worst-hit as they struggled to attend online classes during the COVID-19 lockdown. “We welcome the development but no thanks to the government which deprived us of the fundamental right over the last 18 months,” Ankit Sharma, a college student told PTI.

“Our education was hit after we were forced into homes due to the outbreak of the Coronavirus pandemic and faced a lot of problems due to non-availability of the high speed internet,” he said. Kanwaljeet Singh quipped “better late than never”.

However, Singh, a civil services aspirant, said the student community was the worst hit by the ban as the 2G service was not adequate for the online classes or preparing for an examination. Law student Thakur Sunny said the announcement came as a pleasant surprise as it came at a time when schools and colleges have opened for offline classes.

“There would be no place in the world where 4G service remained suspended for over 550 days. What changed overnight? When the service was required the most it was kept suspended and now when the educational institutions reopened, the government restored it,” he said.

“I actually see some going out of their way to thank government functionaries for 4G restoration. They’re not offering us charity. We should be asking for compensation for our deprivation and losses,” Journalist and peace activist Anuradha Bhasin tweeted.

The business community also welcomed the restoration of 4G and said they can now enjoy all services without frequent disruptions.

Terming the 4G internet service restoration as a “positive step”, Jammu Chamber of Commerce and Industry (JCCI) president Arun Gupta said this would fulfil the aspirations of people, youth and business community in particular. “This will also solve the problems for trade and industry to a great extent regarding generation of e-way bills and e-filing of various documents including GST returns,” he said.

Former minister and vice president of J&K Congress GM Saroori too welcomed the development and said restoration of statehood should be the next step of the central government followed by free and fair elections.

“For a long time, the people of Jammu and Kashmir have been deprived of their legitimate rights. After a period of 18 months, the internet has been restored and during these tough 18 months, our children have suffered a lot in terms of education,” he said.

He lauded the speech by his party colleague and leader of opposition in Lok Sabha Ghulam Nabi Azad recently wherein he supporting restoration of other rights including statehood to Jammu and Kashmir.

Additional spokesperson of National Conference Sarah Hayat Shah, in a tweet, said, “Well good to know 4G is being restored across the entire J&K. The Government of India must restore our rights (Article 370, 35(A), Statehood) as well.”

National Panthers Party chairman and former minister Harsh Dev Singh asked how the can the Centre justify the 18-month ban. “They (Centre) made people face hardships for the last one and a half years and even charged money for 4G internet while providing 2G service. Is there any accountability or not? What is the difference in the situation now and at the time of snapping of internet 18 months earlier?” he said.

Advocating restoration of statehood and early assembly elections to end the “proxy rule” of BJP in Jammu and Kashmir, he said, “The actions over the last few years demonstrate the dictatorial and authoritarian approach of the government which is against the Constitution and democracy.”