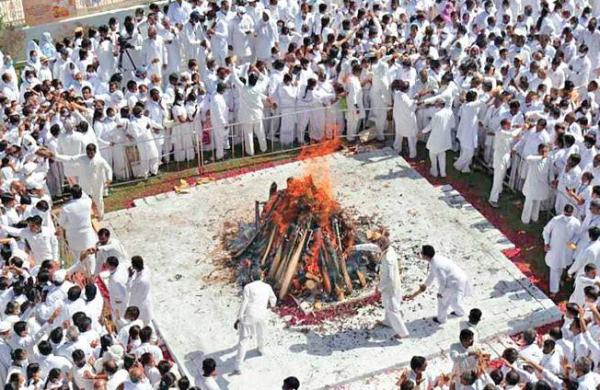 Express News Service
Gehlot-Raje bonhomie at wedding of CS’s sonThey may be political rivals, but CM Ashok Gehlot and former CM Vasundhara Raje were all smiles at the wedding ceremony of Chief Secretary Niranjan Arya’s son in Jaipur last week. When the two veterans of the state politics met at the ceremony, Raje told Gehlot that she was waiting to receive him and also congratulated the Chief Minister for the budget he had recently presented. In response, Gehlot removed his mask and the two were seen exchanging comments on masks in a light-hearted banter. The two leaders appeared in a jolly mood and their video on the occasion has gone viral on social media.

Teenage donor saves life of Shaurya Chakra winner A teenager has given new life to a Shaurya Chakra winner in Jaipur. When 17-year old Sewa Ram from Dholpur district was declared brain-dead last week, his parents decided to donate his kidneys, lungs and liver. Among those who gained from this decision is Col Ratan Sain, a veteran of the Indian Army who had been waiting for a liver transplant for the past two years.  Col Sain had been injured in an ambush during his active career in 1994 at Anantnag. In the blood that was then given to him, one bottle was infected with Hepatitis B which gradually damaged his liver. For the past two years, his condition had been rapidly deteriorating but no donor could be found. A team of doctors led by Dr Shashwat Darren performed the transplant that took 11 hours. The retired colonel is said to be recovering.

Pandemic casts shadow over Desert FestivalThe annual Desert Festival was held at Jaisalmer over three action-packed days in the end of February. The vibrant event, celebrated amidst the beautiful dunes of Thar desert, is one of Rajasthan’s top tourist attractions. The cultural extravaganza of the delights of the desert was full of activities. Though locals and domestic tourists from all over India participated with enthusiasm, the pandemic crisis hit the festival as most foreign tourists skipped this lively event which usually attracts thousands of tourists from all over the world.

Raj prisons ranked first by India JusticeRajasthan has made big gains in improving the conditions in prisons, according to the latest India Justice Report. The desert state got first rank in 2020 as compared to 12th in 2019 according to the recent report compiled by Tata Trusts in collaboration with civil society organisations to assess the capacity of various states to deliver justice to jail inmates. The second edition of the India Justice Report projects that Rajasthan has made this huge improvement in its raking through better budget utilisation, appointing more staff, among others.