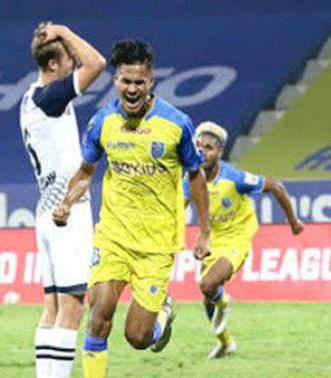 Jackson Singh’s goal in injury time helped Kerala Blasters prevent East Bengal from their first win in the seventh season of the Hero Indian Super League (ISL) and held them to a 1–1 draw. East Bengal retained a 1-0 lead in the first half with a goal goal from a Bakrey corner until injury time, but Jackson missed the first win of the season by scoring a goal in injury time to save Kerala from defeat. This is the second draw in East Bengal’s six matches. The team now has two points and has now reached number 10 in the table.

The team has also lost four. Kerala has been drawn for the third time in six matches and is now at number nine with three points. Kerala has got three defeats so far. In the 13th minute, Kerala’s Bakery corner unfortunately gave the ball into his own net. It seemed that Nishu Kumar, playing his 50th match in IASL, also had a hand in this suicide goal, but this corner goal gave East Bengal a 1-0 lead within the first 15 minutes. Six minutes of extra time was added to the injury time and Jackson scored with an assist from Sahal Abdul Samad to equalize Kerala 1–1 and prevent East Bengal from registering their first win of the season.