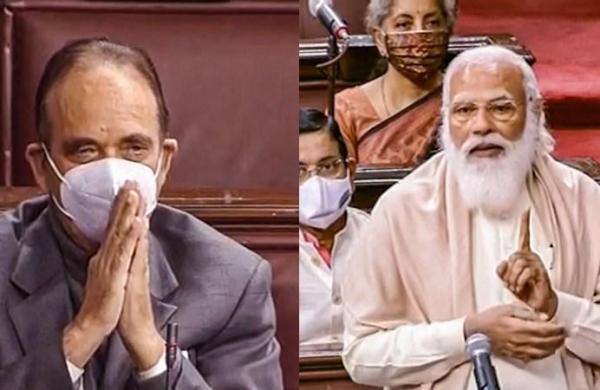 By Online Desk
Recalling the time he worked with outgoing leader of Opposition and veteran Congress leader Ghulam Nabi Azad, Prime Minister Narendra Modi got emotional on Tuesday during his Rajya Sabha speech.

“Gujaratis were stranded during a pilgrimage when a terror attack took place in Jammu and Kashmir when he (Azad) called me. He cared for them like his own family,” PM Modi said with tears in his eyes.

Speaking of his camaraderie in the Parliament, the Prime Minister also spoke of other instances where the two opposing leaders shared a laugh or banter. “Whoever takes his place will have a problem as they will have to work really hard to fill his shoes,” he said.

He noted that Azad had called him to ask for an all-party meeting during the COVID-19 period.

“I liked that and also did it. This kind of connection is there because he has the experience of both being in power and in opposition. Twenty-eight years experience in all, it is a big thing,” the Prime Minister said.

Sharing details of their communication during a terrorist attack on some Gujarati pilgrims in Jammu and Kashmir, Modi said Azad was the first one to call him about the incident.

With tears rolling down his cheeks, Modi said that Azad cried on the call while informing him about the horrific attack.

“Azad was the first person to call me. During that call he could not stop crying,” Modi said.

Earlier, Rajya Sabha Chairman M Venkaiah Naidu described Azad as a voice of sanity in public life over few decades when he made valuable contributions while serving both in government and in opposition.

Azad retires from Rajya Sabha on February 15 after being the leader of the opposition for over six years since June 8, 2014.