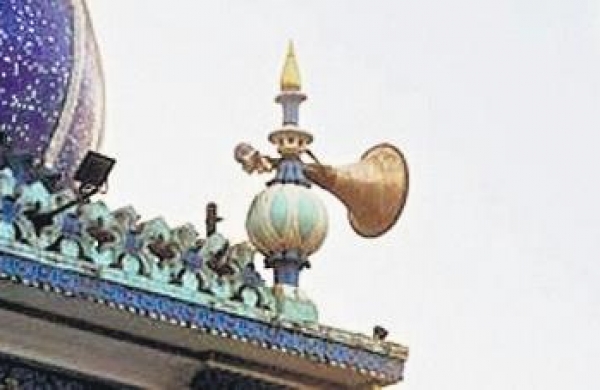 Express News Service
LUCKNOW: A letter, written by Allahabad University Vice-Chancellor to Prayagraj DM around two weeks ago, has created a flutter in the social circles as it is a complaint about alleged “noise” emanating from a mosque situated in the vicinity of her residence in the Civil Lines area of the city causing noise pollution.

However, a prominent Muslim cleric of Lucknow Idgah and chairman of the Indian Centre of Islamic Education has reacted to the letter by demanding “mutual respect of religious sentiments of all the communities”.

The letter with the subject mentioned as “Noise Pollution in the Civil Lines, Prayagraj” was written on March 3 by Prof Sangeeta Srivastava, the recently-appointed VC of Allahabad University. She had addressed the letter to Allahabad DM Bhanu Chandra Goswami expressing her grievance and demanding its redressal.

She has complained in the letter that the morning Azaan (the call to prayers at 5.30 am) from the nearby mosque is causing noise pollution and disturbance to her sleep.

“The sleep is so disturbed that it does not resume even after trying very hard. This also results in headaches throughout the day, causing losses in working hours,” the letter read.

“An old adage — ‘your freedom ends where my nose begins’ — holds true here. I am not against any religion, caste, or creed. They may perform the Azaan without the mike so that others are not disturbed. Even before Eid, they announce Sehri on the mike at 4.00 am. This practice also creates a disturbance toother people. The constitution of India envisages a secular and peaceful co-existence of all communities which needs to be practised in letter and spirit,” says the letter.

A top police official in Prayagraj confirmed they have received the letter. Prayagraj IG KP Singh said that the letter had reached his notice.

“Supreme Court guidelines say that say noise pollution is not permissible between 10 pm to 6 am and no announcements are permitted using public address systems. If this is happening there should be specific permission or else action will be taken. We are studying the letter and will take action to uphold the orders of the Allahabad High Court and the Supreme Court,” said the IG while interacting with media persons.

In response to the letter written by the AU V-C, Prayagraj police approached the said mosque and got the volume of the mike reduced so that it did not hinder the sleep of the residents of the Civil Lines area.

According to Kalim, who manages the mosque, a Sub-Inspector from the local police station had come and told us that due to the high volume of the address system, people of the locality were getting disturbed by the morning ‘Azaan’. ‘So, the volume of the mike was reduced,” he said.

Meanwhile, the VC came under strong criticism from a prominent Lucknow-based Muslim cleric. In a video message, Maulana Khalid Rasheed Firangi Mahali, a member of the All-India Muslim Personal Law Board, condemned the VC’s letter in strong terms.

“Our country is known for Ganga-Jamuni tehzeeb and everyone has mutual respect for all religions. As a result, ‘Azaan’ from mosques and sounds of ‘bhajan kirtan’ from temples have not caused disturbance to anyone’s sleep. Mosques are already implementing the orders of the honorable High Court in this regard and so I would appeal that everyone should respect the sentiments of others’ religion.”