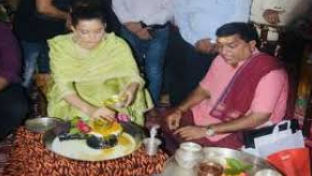 The Anti Narcotics Cell of Mumbai Police has started an investigation into the drugs case against Kangana Ranot. Summons can be sent till Monday for questioning them. Maharashtra’s home ministry on Friday ordered a probe against Kangana. Actress’s former boyfriend study Suman accused her of taking drugs.

On the other hand, Kangna has again targeted the Maharashtra government today. The actress shared a photo of the Somnath temple on Twitter, writing, “How many poor people have brutally destroyed Somnath, but history is witness – no matter how powerful the cruelty and injustice are, in the end the victory is of devotion, every Shiva. BMC broke Kangana’s office on Wednesday. Kangana has since intensified the attack on Shiv Sena. He had said on BMC’s action that he did not make a mistake by comparing Mumbai with Pakistan-occupied Kashmir (PoK). The actress shared a one minute video on Twitter last night and said that the terror and atrocities of the government in Maharashtra are increasing. He has spoken to the former Navy officer in Mumbai about the scuffle of alleged Shiv Sainiks and the state government’s action against a TV channel.