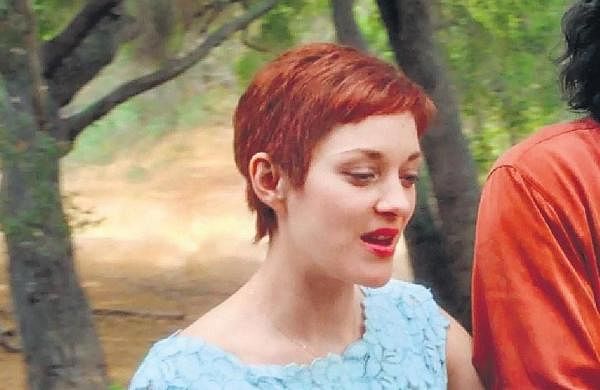 Nothing is new and yet everything is new in Annette, the latest film from Leos Carax, Cannes Best Director winner this year. It has the Carax signature of messy characters in messier relationships, but it is also his English language debut. It has Carax’s obsession with a decaying world, but it is also a musical that is its own parody. Annette has Caroline Champetier behind the camera, she also shot Carax’s 2012 feature Holy Motors that still does funny things to the collective mind of its audience.

Like Holy Motors, Champetier brings a flair for colour to this musical, the expressionist frames fit like a perfect glove to excavate the crude parts of showbiz and celebrities with all its modern media coverage, everything distinctly American. While Holy Motors dealt with the expendability of the technical form behind the attractive enterprise of show business, Annette is more Pola X given a musical and paparazzi treatment except with a lot of humour.

Annette is an invitation into Leos Carax metaverse with music by Sparks—Ron Mael and Russell Mael. The film is bookended by a musical prologue and epilogue, filmed in quick strides where the shot keeps pace with the actors, all of them united in welcoming us into their world as they are in saying goodnight. It asks us to hold our breath until the end of the show which we do.

Carax deigns the film to be self-aware (“authors are here show no disdain, authors are here and they are vain”, goes the prologue), recognizing that the character live two lives—one on stage—Henry McHenry (Adam Driver), a performance artist masquerading as a comedian and Ann Defrasnoux (Marion Cotillard), a soprano working the opera, and one as their real life counterparts, a high profile celebrity couple who later marry and have a daughter—Annette, portrayed as a marionette with loose limbs that could come undone with the screws anytime. That’s the Carax way of portraying the doomed relationship, the union more readily artificial than the actual equation.

Carax’s film focuses on the warts, it’s not a Taj Mahal that he builds but a carefully curated ruined monument. He wants us to linger on the jokes, the chaos, the far-reaching tentacles of a marriage that is imploding from within. Henry’s (and by extension, Carax) comedic act co-opts the audience in its expression, giving voice to what we must feel about him. As a device, this implicates the channels of communication in today’s world that pays attention to the oppressor in a relationship—with valid reasons—in a way that is exclusionary of the oppressed and her thoughts and words. Ann almost disappears in the latter half of the film, only her spirit haunts the film after a beautiful, spooky stretch on a seashore.

Carax turns Annette into operatic horror. Ann’s aria in her own grand opera is conspicuous by her absence. In a telling scene, Carax places the camera in the back seat of a car as it drives through a highway on a beautiful sunny day with regular traffic with Ann seated next to the window looking at a TV screen showing the California wildfires. An emblematic representation of the distance between her physical and mental state, a scene immediately after a dream sequence in which six women give a press conference accusing Henry of serial sexual abuse.

Annette is singular in its cinematic language, like any other Carax film, pushing the musical form to its extreme—it is not The Umbrellas of Cherbourg though it is sung-through even in casual speaking portions. As if to reinforce this is Carax, it has a man on a motorbike and Cotillard biting into apples (Henry, the rotten centrepiece), the film’s beginning has them drift away in opposite directions in different modes of transport suggesting divergent career arcs. As amusing as it is, Annette refers to Henry’s stand-up routine as “show” and Ann’s opera as “gig”.

An early scene shows Ann in a pool (once bitten apple by the side) with a lush courtyard that in the film’s third act transforms into a dead and overgrown detritus with crawling reptiles. The film is Carax’s way of portraying not only a doomed relationship but a doomed pop culture media landscape with no rules and no established boundaries, the transactional relationship between the artist and the audience never up for negotiation. Art in a capitalist world is exploitative and so are the artists. Nonetheless, we are in love. And it is hard to explain, sing Ann and Henry.