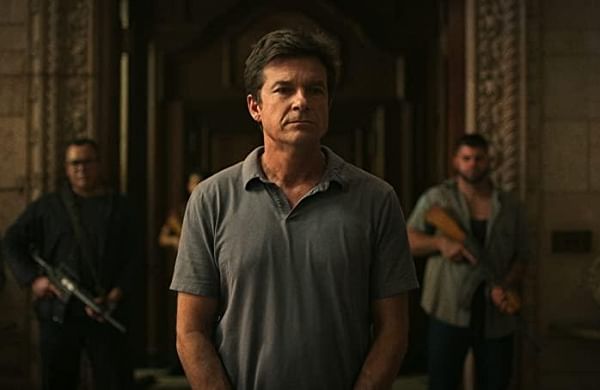 What was the thought behind splitting the final season into two parts instead of bowing out with a full fifth season?

The thinking is really about the fact that we knew this was going to be our last season, so rather than doing our usual 10-episode season, we shot 14, and split it into two halves. So this half-season really is like a season on its own and it all builds to the finale, I think, everyone has been waiting for.

Can you tell us anything at all about how it all ends for Marty and Wendy?

Nope! Obviously, I can’t give anything away other than I think the way we end it is great. I think everyone is going to be pretty satisfied by the end, at least I hope so! It really feels like the perfect way to finish the story for Marty and resolve the situation he got his family into back in the first season. A lot has happened to him and his family since then. These last episodes leading up to the finale will see Marty and Wendy having to make some very big decisions for their family. That’s all I can say.

The pandemic meant you couldn’t direct the opening episodes of this season but you returned to direct the final episode. Tell us what it was like.

Pretty emotional, but also gratifying. I feel so privileged to have gotten to play this character and work with these people that it kind of felt right to be directing us out.

How hard is it to both direct and act in a show like Ozark, especially for such a crucial episode?

I actually love it. I’ve been acting for so long now that my interest in the camera comes, kind of, naturally. I’m always wanting to help out behind the camera as an actor in any way I can. It’s just how I am and how I was taught at a very young age. Directing feels natural to me and, with acting at the same time, I actually find it useful. It’s like you can dictate how a scene plays out from in front of the camera by having the other actors respond to what you are doing or by how you respond to them.

What would you say has been the secret to the show’s incredible success?

I think it starts with the writers. They have done a phenomenal job in creating and developing these characters through the seasons till now. And, just generally, it’s the incredible cast and crew that I have been so lucky to work with on this show.

They are so talented and so great to work with. I’m going to miss them a lot. Also, Ozark is a show with high stakes and huge risks, but it’s still about normal people. Marty is just a normal middle-aged guy caught up in this criminal world. That’s the appeal I think.

How have you enjoyed having Laura Linney as your on-screen wife over the past four seasons?

What can I say? Laura is incredible. She’s an amazing actor and just a beautiful person. We get along so well, which is a good thing because there are times while making a show like this, when I have seen more of my Ozark wife than I have my real wife!

A lot of people seemed to binge-watch Ozark during quarantine. Is that something you were aware of at the time?

Anecdotally, yeah, that seems to be the case. People either were watching it anyway or they were catching up with it on Netflix because someone maybe suggested it to them. We definitely picked up a lot of viewers over that time. It’s humbling that it found such a big audience over what was a difficult time for everyone.

Obviously, that time was all about the incredible work by our lifesavers, but it’s nice to think that our little show maybe did something to help people through quarantine. Someone told me Barack Obama is a big Ozark fan. That’s mind-blowing.

Now that Ozark is over, what kind of projects are you looking for next?

I’m always just happy to be working and to have the chance to work with good people. Whether it’s acting, directing or producing, it’s all about the people for me. I’ve got two beautiful little girls who I love to spend family time with, but I love my job and I’d like to keep this momentum going if I can. I have some things lined up but the past has taught me to manage my expectations. I’d like to do more TV. I’d like to do movies. We’ll see.

Would you ever consider returning to do another sitcom or has Ozark made you want to stick with drama now?

I love drama, but I still love comedy too. I’d love to do more comedy but as for a sitcom, it would have to be more edgy and more sophisticated. It would have to be a lot more current because comedy has changed a lot.

Finally, your SmartLess podcast has also become a huge hit. Did you ever think it would become so popular?

No, it’s crazy. When Will (Arnett), Sean (Hayes) and I started the podcast, it was supposed to be just a bit of fun. Turns out people actually seem to want to hear three guys talk about stuff. We’ve even been touring with it. It’s mind-blowing to me that people will pay to see us just sitting on stage talking in the way people pay to see singers or actors. I’m grateful, it’s a lot of fun but it’s crazy.