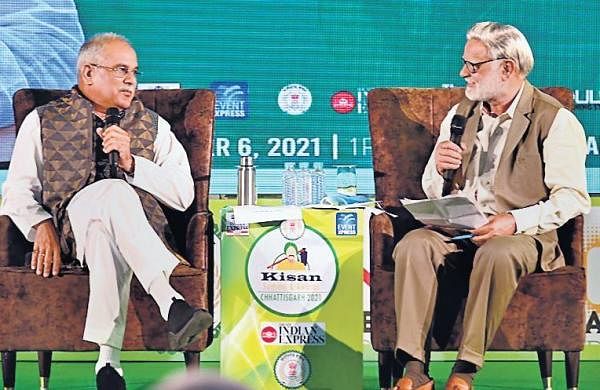 From the Gauthan scheme to allegations of soft Hindutva, Chhattisgarh Chief Minister Bhupesh Baghel spoke on a wide range of issues with The New Indian Express group editorial director Prabhu Chawla during the Kisan Summit and awards function held in Raipur

You understood the vote-catching capacity of cows that the BJP failed to understand. Cows can also fetch votes… Earlier, farmers used to sustain a strong economic system with the cattle they had, carry out business in fairs, which no longer exists. Agriculture equipment almost ended the utility of cattle. Livestock owners and villagers are compelled to let cattle out in the open. After extensive thoughts and deliberations, we decided to have Gauthan (cattle shed)  and purchase cow dung. It persuaded cattle owners to keep cows with them or at Gauthan. This prevented cattle from damaging crop and moving out on roads.

But you astutely linked it to economics via politics… The Gauthan scheme has proved to be advantageous after we linked it to the economics. It is the revival of rural economy and there is no underlying politics in it. It is their (BJP) working style which is linked to ‘divide and rule’ and emotionally exploit the masses. The party has sought votes either on the name of Lord Ram or cows.

Your personality is linked to farm, village and forests. Tell us more about it.I have been associated with agriculture and engaged in it since my school days. It was already there in our family. I lived the life of a villager, eagerly involved in every local and religious festivals. My sentiments are deeply rooted to rural life. We used to wake up during the wee hours during the cultivation season.

Did you ever plough the field?Yes. At younger age, I was well accustomed with the agriculture exercises and essential requisites that farmers know about their crops. I can even milk cows, take buffaloes to village ponds and even knew to use injection on the cattle.

Today, the younger generation is not willing to take up the farming as a profession. I don’t agree. This belief was earlier prevailing but during the last three years, the substantial increase in the net sown area under cultivation and the growing strength of farmers suggests ‘farming is equally seen as the profitable profession’. For instance, in 2018, there were 15 lakh farmers who registered for paddy  procurement and today the figure has reached over 22 lakh.

You actively promote local Chhattisgarh sportsThe old traditions need to be improved. Various local products with value addition are being sent outside the state. All these are reviving the traditions and increasing the scope of trading activities in rural areas. We are trying to preserve our own culture including traditional food, sports, thoughts, lifestyle and live with them.

Isn’t your Ram van gaman path suggesting a competition (with BJP) on the name of Ram?We are not in any competition. In Chhattisgarh, Ram is deeply embedded in our age-old culture. The birthplace of Kaushalya, the mother of Lord Ram, is at Chandkhuri, not far from Raipur. Ram-Ram tradition exists in our custom.

But aren’t you pursuing a soft Hindutva approach? Hindutva was coined by Savarkar and that concept was based on aggression, violence and hatred. It was rejected while he was alive. Who actually is a Hindu — the person who shows compassion, believes in amity, love, tolerance and social harmony. Savarkar’s concept of Hindutva will not work.