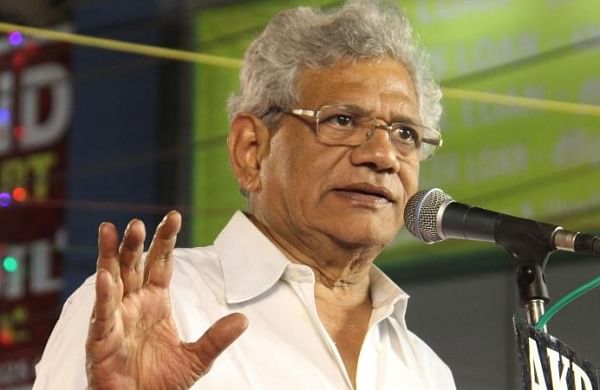 Bringing down the Modi government is the top priority for the Left, which will consider the possibility of joining any third front or opposition alliance only after this objective is achieved, CPM general secretary Sitaram Yechury told Rajesh Kumar Thakur in an interview.

Do you think a Third Front imperative to challenge the BJP’s hegemony in the 2024 Lok Sabha elections?

At present, talking about the Third Front is mere speculation. In Indian politics, so far pre-poll coalitions in parliamentary elections have not been successful. They have succeeded only in state elections. Was there a pre-poll alliance in 2004?

The UPA was formed after the elections and ruled for two terms. Currently, the need is that all opposition parties first fight strongly to defeat the BJP in the 2024 Lok Sabha elections and then think about a post-poll coalition.

Would the CPM go with the TMC if the latter forges a non-Congress, non-BJP front with parties like TRS, DMK?

Again, I am repeating that talks about pre-poll alliances or Third Front are premature. The TMC, just a few days ago, had marred the local bodies’ elections in West Bengal with violence. In Bengal, the CPM lost 229 comrades between 2011 and 2021 and around 1,02,000 sympathisers were driven away from their homes. More than 1,30,000 of our members were implicated in false cases.

The TMC, having been a part of the BJP-led NDA, is today ranged against the BJP. But it continues with its anti-CPM actions. It is aspiring to be the leader of the anti-BJP forces at the national level. We are neither against such aspirations of any party nor in support till we pull down the BJP from power.

In its draft political resolution, the CPM has noted that the Congress party’s political strength is on a decline. Will you be inclined towards joining a coalition led by it?

Our objective is to defeat the BJP in the next parliamentary elections. Whichever party in opposition works on this objective, we can have an ‘electoral understanding’ with them for the common goal… There can’t be a political alliance with the Congress party. But the CPM will continue supporting all secular parties in their efforts to defeat the BJP.

TMC supremo and West Bengal CM Mamata Banerjee recently telephoned her Tamil Nadu and Telangana counterparts suggesting a meeting of all opposition CMs over governors overstepping constitutional mandate in non-BJP states. Will the CM of your party join such a meeting if it is held?

This does not carry much political significance for us. The most important task for us is to educate and polarise the people against the BJP-led government that has ruined the future of the youth.

Will the results of state polls have a bearing on opposition strategies against the BJP?

Yes, they will. But despite that, there is a need to work objectively to make the people aware of the BJP-led government’s utter failure in sorting out country’s basic problems. At the national level, five Left parties have given joint calls for action on various issues and we will continue fighting to first pull down the BJP from power and then think of anything further.

It is said that the Opposition lacks a face to counter Modi. With this handicap, how will they be able to oust the BJP?

Let me make it clear that it’s not a presidential election that will be held in 2024 for which a face is required. It is the parliamentary elections, which will be fought on issues plaguing the country’s prosperity and peace.