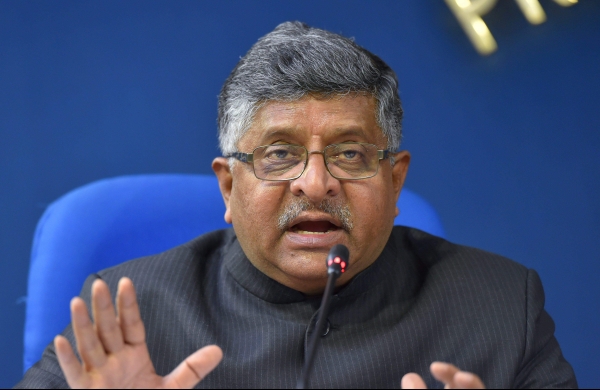 Express News Service
PATNA: If everything goes well, materials on internet will soon be made available into India’s regional languages including Hindi and others in order to increase the digital power of country across the world.Sharing this information with the media on Saturday, Union IT and Law Minister Ravi Shankar Prasad said that the internet materials will also be translated into Hindi and other languages of India in order to strengthen the digital power of the country.

He said that India is emerging as one of the most powerful countries in digital sectors along with other sectors.Speaking to the media here, Prasad said that a special allocation in the general budget of the country also been made for making internet materials available in India’s regional languages including Hindi and others. “This will certainly give a strong impetus in the digital move of the country disseminatingknowledge and information among the growing population of internet users”, he said.

Pointing out a new initiative called ‘Production Linked Incentive’ (PIL), the minister said that the government of India will provide now incentive related to production to companies with a motto-More you produce and more you get incentive.”

In India, including Bihar, digital changes are taking place rapidly and elaborately with focus on making vibrant digital India. The world’s all top companies included Apple and Samsung have moved to India and will produce mobiles and its components worth Rs 10.lakh crore. The companies now in India have started production aiming to do export of mobile and components worth Rs 7 lakh crores providing jobs to 9 lakhs  of direct or indirect employment”, Prasad claimed.

Without taking the name of China directly, Prasad said: “I will not name our bog neighbour country but 10 companies from that country have now come to India amid the corona crisis”.

He also said that the Government of India is mulling over to introduce the PLI scheme in 12 more sectors including textiles, telecom and others also.

Quoting data, the IT minister shared that out of 135 crore population of India, 120 crore people have now access to mobile phones and out of them, 70 crores use the smartphones while 60 -70 crore people use the internet services. He reiterated that PM Narendra Modi led government in the country is dedicated and committed to taking developments of the nation to a new heights.