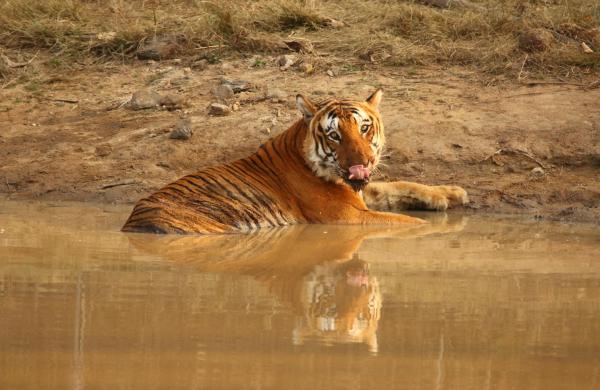 Express News Service
DEHRADUN: Despite registering an increase of 263 tigers between years 2008-2018 in Uttarakhand, incidents of human-wildlife conflict with tigers are far lesser than human-leopard and human-elephants.

Rajiv Bhartari, state forest chief, principal chief conservator of forests, Uttarakhand said, “Between 2008-10 when the number of tigers started increasing in the state, we were apprehensive that there will be a rise in conductor incidents. So far those fears have been dealt with. The state forest department with community initiative and other efforts have been able to minimize the conflict. Also, tiger tends to avoid contact with a human being in most cases.”

In conflict incidents with elephants, total 184 human lives were lost in 21 years while 181 were left injured. Human-animal conflict with Himalayan Black bear left 59 dead while 879 injured in the same duration.

Last year, on the International Tiger Day, the report titled  ‘Status of Tigers Co-predators and Prey in India’, released by Union ministry of environment, forest and climate change minister (MoEFCC) revealed that Corbett Tiger Reserve (CTR) of Uttarakhand has the highest tiger density amongst 50 tiger reserves in India.

The CTR has 14 tigers per 100 square kilometers which is highest in India.

According to the volumnous 656-page report, the CTR has the highest number of tigers with 231 inside the reserve and 266 utilizing the reserve.

Utilizing animals do not necessarily share habitat on permanent basis but move from one area to another using corridors which connect the forests where tiger resides.

With the number of tigers thriving in Uttarakhand, conservationists applauded the efforts of the state while cautioning to be equally vigilant about the habitat of the national animal.

AG Ansari, a conservationist based in Ramnagar, home of the famed Corbett Tiger Reserve said, “Our progress has been amazing since the formation of Uttarakhand in terms of tiger conservation. While everything is going good we need to be aware about the shrinking habitat of our wildlife. This could fuel the human-wildlife conflict and deter the conservation efforts.”

Interestingly, in Uttarakhand, tiger has been spotted from plains to high altitude areas such as Kedarnath Wildlife Sanctury ranging from 300 meters to 3400 meters above the sea level.

Parag Madhukar Dhakate, senior Indian Forest Services officer who is chief conversator, eco-tourism said, “The tigers are found from plains to mountains which is a rare thing in India. It is due to efforts of the forest department in collaboration with people of the state that wildlife is thriving.”