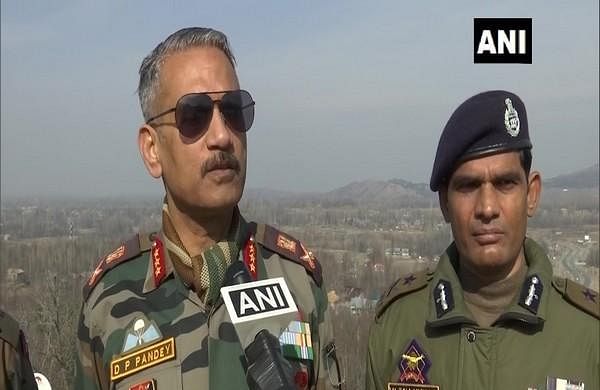 Anantnag (Jammu and Kashmir): General Officer Commanding (GOC) 15 Corps, Lt General DP Pandey on Friday claimed that the infiltration attempts from the other side of the border into Jammu and Kashmir have gone down this year, adding that terror groups are trying to recruit young children aged 15-16 years.

“The infiltration attempts are not serious as of now. The numbers have gone down this year. We are vigilant and totally prepared to ensure that no one is able to sneak in,” said Pandey while talking to ANI.

Pandey also claimed that the violence has also reduced in the Union Territory this year, adding that terrorists are finding it hard to recruit people into the ranks of terrorists.

Terror groups are finding it hard to recruit well-educated youth between 22-25 years of age. So now they are turning to young children aged 15-16 years old to join the ranks of terrorists. I am sure that these parameters are going in a direction which will ensure a better and safe environment for the people of Kashmir,” he added.

Regarding the Army’s activities to strengthen its relationship with the common citizens, Pandey said that the Army’s relations with the people are already pretty good and it is reflected in how they are allowed to carry out their operations.

“We are engaging at various levels with the civil population. We are looking for support from civil society to end this cycle of violence,” he added.

The Inspector-General of Police (IGP) Kashmir Vijay Kumar said that around 86 local terrorists are currently active in Jammu and Kashmir.

“We have been able to breach the mark of 200 terrorists in Kashmir, as it has come down to 180. For the first time in history, local terrorists have reduced to less than 100. The count is 85-86 after yesterday’s encounter. So, terrorism is reducing,” said IGP Kashmir said while addressing a joint press conference on the two encounters in Kulgam and Anantnag district.

He further said that out of 128 local militants who joined militancy this year, 73 were killed while 17 were arrested.

The encounter which broke out on Wednesday evening in Jammu and Kashmir’s Anantnag and Kulgam districts, ended this morning with the killing of six JeM terrorists including two Pakistani nationals and an army soldier.