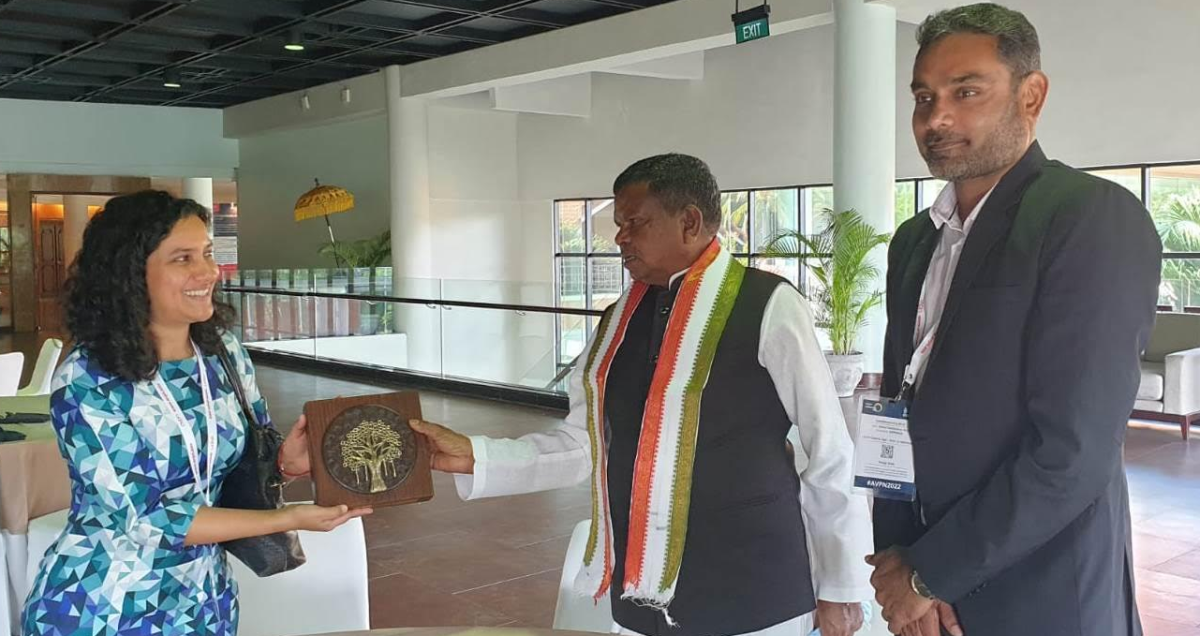 The Minister of Industry, Mr. Kawasi Lakhma, today during his stay in Indonesia, attended the G20 AVPN Global Conference in the city of Bali there. He discussed with the industrial representatives there. Shri Lakhma gave detailed information about the works of sustainable development in Chhattisgarh. He discussed the export prospects with the industrial representatives there and invited them to invest in Chhattisgarh. Shri Lakhma visited Uluwatum temple in Bali. In the Global Conference held at Convention Center in Bali, Mr. Lakhma discussed with Regional Director of Netherlands based organization Porticus Sukhmani Sethi and gave detailed information about the work being done in Sustainable Development in Chhattisgarh. He laid emphasis on research on improving education, especially in the Bastar region. He also invited Ms. Sethi to come to Chhattisgarh with her team. During the discussion, Ms. Sethi told that Porticus is already working in other states like Jharkhand and its result is also good. Mr. Lakhma also met Ms. Priya Shankar, Executive Director of Sanford PACS organization of America and asked him. Gave detailed information on various topics including Godhan Nyay Yojana, Suraji Gaon Yojana, C-Mart, Mahatma Gandhi Rural Industrial Park running in Chhattisgarh. He also discussed in detail with Ms. Priya Shankar the work being done by the government to improve the rural economy with the minor forest produce available in the state. Ms. Priya Shankar appreciated the initiative of the Chhattisgarh government towards strengthening the rural economy. . Shri Lakhma invited him to come to Chhattisgarh. So that the cooperation of his institution can be taken in research and socio-economic progress in education. It is worth mentioning that a high level delegation of Chhattisgarh is on a week-long visit to Indonesia to participate in the G-20 Global Conference under the leadership of Industries Minister Shri Kawasi Lakhma. The delegation includes Shri Arun Prasad, Managing Director of CSIDC of Industries Department and senior officers. Like this:Like Loading… Continue Reading