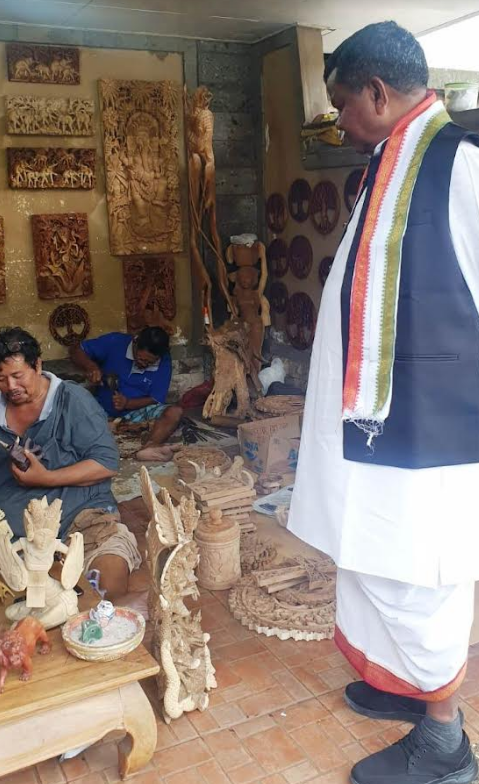 The delegation led by Chhattisgarh Industries Minister Mr. Kawasi Lakhma, who went to Indonesia to attend the G-20 VPN Global Conference held in Indonesia, met the artisans and distributors of handicraft items in Ubud for the second day today, with respect to the export of handicrafts of Chhattisgarh. discussed. Minister Mr. Lakhma told him during the discussion that more beautiful handicrafts are prepared by the craftsmen in Chhattisgarh than the handicrafts of Indonesia. He invited the handicraft exporter to come to Chhattisgarh. Shri Lakhma said that the handicrafts of Chhattisgarh are very rich and popular. We have immense potential for export of handicraft items. Significantly, handicraft items from Indonesia are largely exported to European countries. The handicrafts of Chhattisgarh are better and more beautiful as compared to Indonesian handicraft items. He also asked the officials involved in the delegation to take necessary initiatives for the export of handicraft items from Chhattisgarh. Minister Mr. Lakhma went to Ubud the next day and visited the 400-year-old Ubud Palace and visited the Saraswati temple. Delegates from about 20 countries have participated in the G-20 VPN Global Conference. In today’s meeting, mainly Ms. Rajshree Sen India Head Sesame Street, which works in the field of primary education of children. Mr. Ronit Kanwar is the lead partner of the Partnership, which deals with creating a workforce for college students, and Mr. Shivkumar is the Founder Catalyst Foundation, which works for the development of the green industry and creating an ecosystem for it. All these institutes are of international standard, the representatives of the above institutes expressed their desire to work in Chhattisgarh. During this, the Managing Director of CSIDC Shri P. Arun Prasad and Shri O.P. Banjare was also present. Like this:Like Loading… Continue Reading