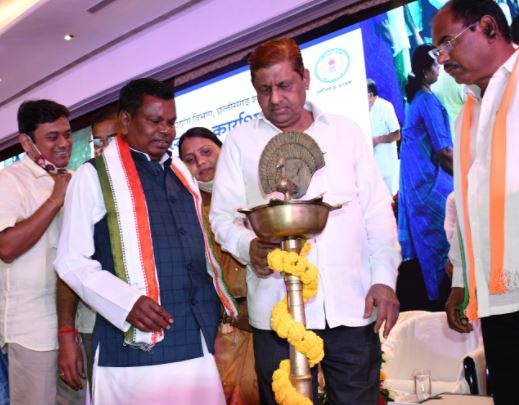 Forest Minister Mr. Mohammad Akbar and Minister of Commerce and Industry, Commercial Tax (Excise) Minister Mr. Kavasi Lakhma inaugurated the District Level Workshop of Vigyan Samagam organized at Rajnandgaon today Addressing the program, Minister in charge of Forest and Rajnandgaon district, Mr. Mohammad Akbar said that this venture meeting is an effective effort to motivate more and more people to set up industries. Under the Industrial Policy of the year 2019-2024, entrepreneurs have been given various exemptions for inclusive growth, self-reliant and mature economy, which is the highest in the country.

Minister Mr. Mohammad Akbar further said that Chhattisgarh has been the first state in the procurement of micronutrients and has been purchased by the government at a support price of Rs 112 crores, which is 73 percent of the country’s minor produce. He said that after the value addition, the women of small self-help groups will get the benefit of small forest produce. In the year 2019, a remuneration of Rs 602 crore was paid to the tendupe collectors. The remuneration rate for Tendu collection was Rs 2500 in the year 2018, which has been increased to Rs 4000. He said that in view of the abundant micro-produce in Chhattisgarh, the Vananchal industry package has been brought to encourage the manufacture of forest produce, herbal and food processing products. Which will benefit the entrepreneurs investing financially in this area. He said that the Godhan Nyaya Yojana is the first scheme of the world based on cow dung, which has provided employment to one lakh 48 thousand families of the state. Vermi compost is being manufactured. Chhattisgarh government has waived 9 thousand crore loans of farmers, while food grains are being given to all under public distribution system. Under the Rajiv Gandhi Kisan Nyay Yojana, three installments have been given to the farmers and the fourth installment will be given in March.