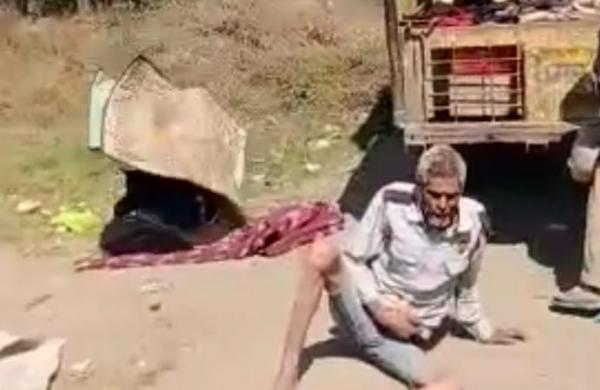 Express News Service
BHOPAL: The inhuman incident of dumping elderly destitute by the Indore Municipal Corporation (IMC) team on the outskirts of the country’s cleanest city Indore on January 29 afternoon has come as a blessing in disguise for a middle-aged woman in city’s Chandan Nagar area.

The shocking incident, whose visuals caused widespread outrage across the country, has reunited  48-year-old Pushpa Salvi with her mentally disturbed 55-year-old husband Anil Salvi, who was missing for a month.

A month backAnil went missing, after which his wife Pushpa lodged a missing person complaint at city’s Chandan Nagar police station. On January 29, when the chilling videos went viral, a close relative of the Salvi family spotted Anilamong the destitute.

“The next day after contacting the IMC officials, we went to various Rayan Baseras (winter shelters) and finally managed to find him (my husband) in the Nipaniya area of the city. Had the January 29 incident not happened, I wonder how long I would have waited to reunite with my husband,” Pushpa Salvi said.

Another 65-year-old retired school teacher Kusum Pawar, who resides in Brahm Bag Colony of Indore too spotted her mentally disturbed and partially paralysed brother 63-year-old Pradip Pawar in the video, who had been missing for three months now. However, the retired school teacher hasn’t been lucky to find her missing brother.

“When the visuals of the January 29 incident became viral in the media, I spotted my missing brother Pradip Pawar, who has been missing since Navratri last year and despite police complaint at Sadar Bazar police station, we haven’t been able to trace him. Before he went missing in October, he was undergoing mental treatment. He has partially paralysed also and cannot move or speak easily. Since January 29, I’ve met officials at the IMC and the Sadar Bazar police station, who had promised to trace him back by Wednesday, but he is yet to be traced,” Kusum Pawar told The New Indian Express.

According to the retired teacher, she went to the shelter, where the homeless elderlies seen in the visuals have been housed after being brought back on January 29.

“At the shelter, I met a physically challenged man Ramu, who was among those elderlies who were first dumped by the IMC team, but later brought back on the opposition by the local residents of Kshipra on the city’s outskirts. Ramu confirmed to me that my missing brother Pradip was among those who were first dumped on the highway but later brought back to Indore city following opposition by Kshipra village residents. Ramu has told me that while on way back in the IMC truck, my brother Pradip was forcefully dumped again from the truck at one of the road crossings of Indore. When Ramu protested the dumping of my brother at one of the road crossings of the city, both he and my brother were hit by the on-duty IMC staff with sticks,” Kusum Pawar said.

Helping Kusum in searching her lost brother is Congress MLA from Indore-I seat Sanjay Shukla. “We’ve met the Indore DIG Harinarayanchari Mishra and also top officials of the IMC and asked them to search the missing brother of the retired school teacher. If the missing man isn’t found, we’ll protest in the city,” Shukla said on Wednesday.

The Congress MLA also claimed that there were 15 homeless elderlies on the IMC truck on January 29, out of which only three persons have been brought back and left at the winter shelter, while 12 others are still missing as they were dumped by the IMC staff in various parts of the city on the way back.

When contacted in the matter by TNIE, the Indore additional municipal commissioner Abhay Rajgaonkar said a probe is underway in the entire incident.

The IMC staff had taken elderly homeless men and women from various parts of Indore city and dumped them on the highway in Kshipra village (on Indore’s outskirts). The IMC staff, however, was forced by the villagers to bring back the dumped elderlies back to Indore just a short while later.

Later acting in the matter, the MP CM Shivraj Singh Chouhan had ordered the suspension of Indore’s deputy municipal commissioner Pratap Solanki and the termination of services of two contractual staff of the civic body.